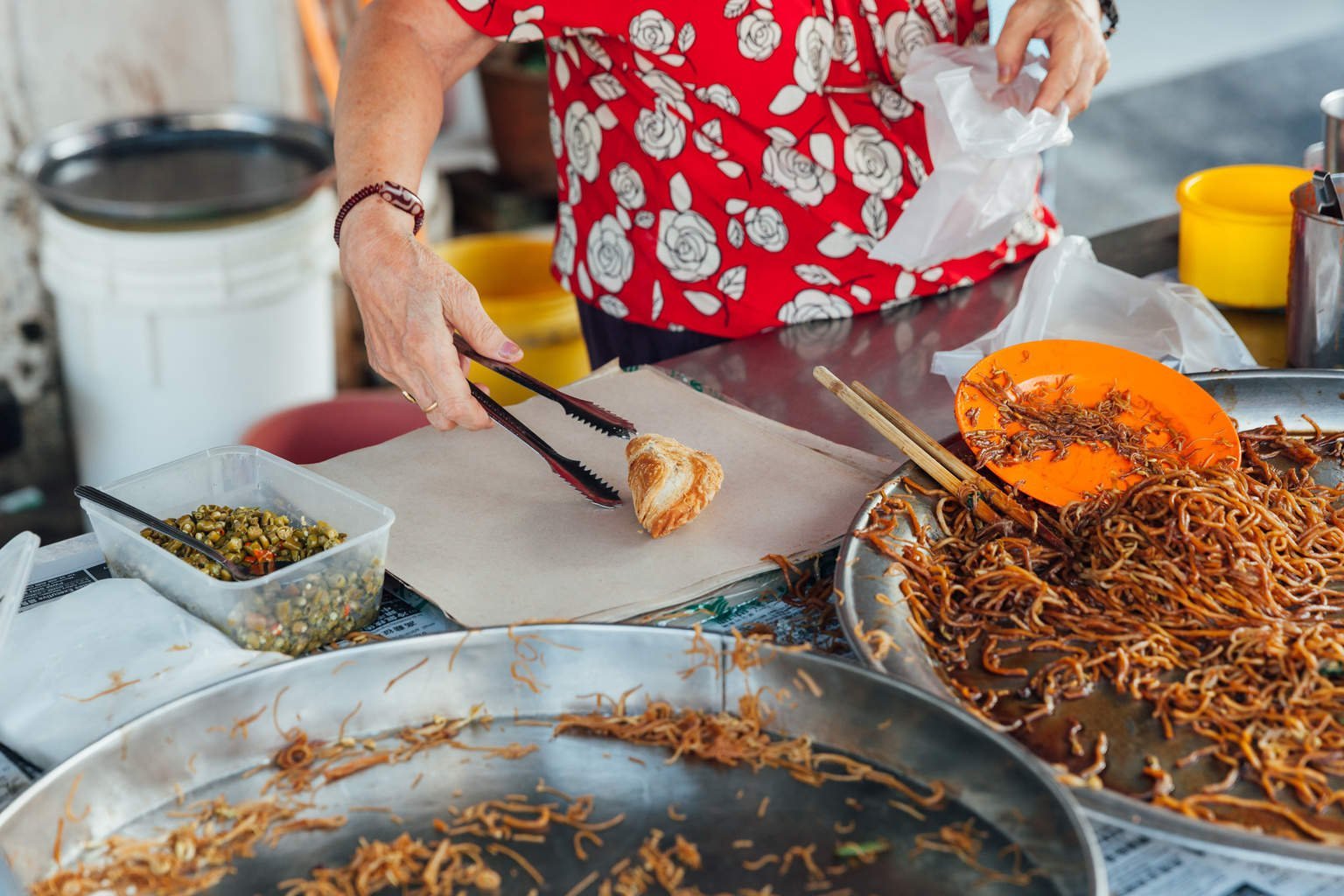 Penang Street Food: 5 Local Bites that Will Change Your Life

Posted at h in Malaysia by 32 Comments

Penang street food is awesome. Packed with sweet and savory flavor, these dishes will have you frantic for ways to recreate at home. Read on for great bites.

The island of Penang in Malaysia is world-renowned for its delicious street food. In 2004, Time Magazine named it the “Best Street Food in Asia. In 2014, Lonely Planet named it their number one food destination in the world.

George Town, the state capital of Penang, was set up as a trading port in 1786 by the East India Trading Company. The trade in Penang grew quickly after its founding and quickly became a melting pot of the surrounding cultures.

Because of this multicultural heritage, Penang street food became a blend of cuisines from Malay, Indian, Chinese, Peranakan, and Western culture, so you can experience a unique blend of different cultures in each dish.

If you’re an international foodie, getting to try some authentic Penang street food should be at the top of your list. We recommend you try a little bit of everything (and don’t be afraid to be adventurous and try something you normally wouldn’t), but if you don’t want to hold up the order line trying to decide, here are the five Penang street food dishes you absolutely have to try!

If you're an international foodie, trying some authentic Penang street food is an absolute mustClick To Tweet

Top 5 Penang Street Food Dishes You Have to Try! 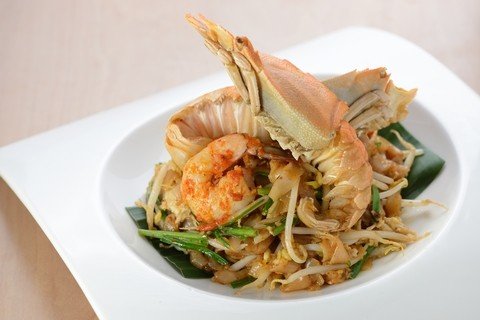 Char Koay Teow is arguably the most popular local street food in Penang. It originally began as a Chinese pork dish, but on the island of Penang, seafood is easier to come by than pork, so immigrants began incorporating seafood into the dish.

For the best Char Koay Teow in Penang, we recommend you go to  Famous Ah Leng Char Koay Teow on Jalan Dato’ Keramat. They’re famous for offering a wide variety of extra ingredients, including duck or chicken eggs, mantis shrimp, and HUGE prawns. 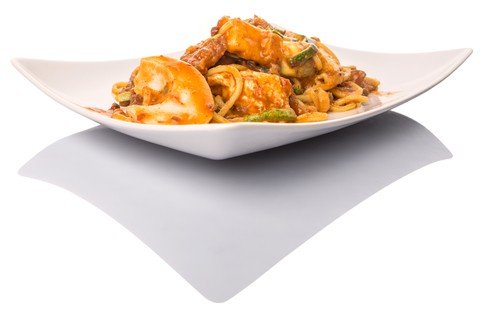 Pasembur is a blend of Malay and Indian salad dishes with a Chinese twist. It consists of shredded jicama, cucumbers, fried beancurd, prawn fritters, and slivers of jellyfish, topped with a mildly spicy, sweet potato sauce. Some variations on the dish include octopus rings, crab, or chunks of hardboiled egg.

As with most Penang street food dishes, there are many variations on Pasembur throughout the island, so if you can’t stomach the idea of eating jellyfish slivers, you can easily find it with or without certain ingredients (but we highly recommend at least trying the jellyfish.)

The Kompleks Makanan Persiaran Gurney has a delicious Pasembur “Rojak” and it’s great for the more picky food-lovers, looking for a lot of different options and variations. 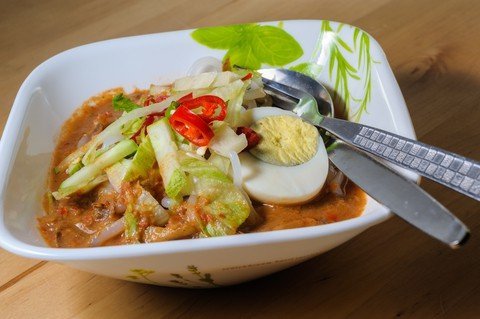 Asam Laksa is a noodle soup dish that is popular all over the island. It gained international notoriety when it was named as the number 7 most delicious food in the world by CNN Travel.

Some variations (like the hae ko) come in a thick, dark, sweeter sauce, while others (like the belachan) come in rock-like pieces and taste spicier.

If you’re looking for the best experience, the Asam Laksa at Ayer Itam market is famous for having an “infinity pot,” where the same stock is used throughout the day. 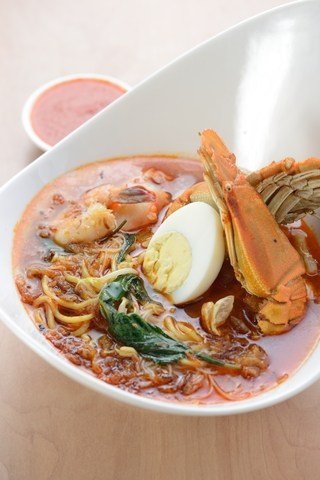 For those of us who like things a little more on the spicy side, the Penang Prawn Mee (or Hokkien Mee) is going to be the highlight of your trip.

Mee is the Hokkien word for egg noodles (although some variations use rice vermicelli) and as you might have guessed, the other main ingredient is prawn. The broth is made from dried shrimp, prawn shells, pepper, garlic, chili paste, and sometimes with pork bones and lard.

In addition to medium to small prawns, the soup is served in most places with pork slices, fish cake, bean sprouts, Chinese watercress, and boiled egg. These are the basic ingredients. However, it’s not difficult to find places that offer a variety of add-ons. These can include roast pork, pork intestines, squid, and spare ribs.

You might find a thicker, sweeter variation of this dish in Taiwan. Or you can find a crispier variation in Thailand and Indonesia. But the Penang Oyster Omelette blows them all away for a few reasons. First, they use fresh oysters in Penang rather than frozen as is often the case in places like Singapore. They also use fried rice flour batter and eggs. This produces a lighter, crispy finish rather than being gooey and thick.

Aside from the fresh oysters and eggs, this dish consists of potato starch, coriander, and chopped garlic. You’ll also find variations on the chili dipping sauce that is served alongside it. Most places in Penang serve it with a sweeter chili sauce. But you can find spicier variations if you’re looking for that extra kick.

If you’re in George Town, you can get a delicious Oyster Omelette at the Kafe Heng Huat on the Lorong Selamat, with a sweet or spicy chili sauce. 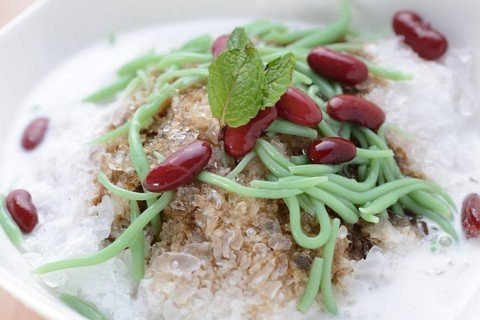 Finally, what meal is complete without something sweet for dessert?

Chendol is a sweet and chewy rice flour jelly formed into thin green slivers like string beans. It’s normally served in a bowl of shaved ice, with red beans, fresh coconut milk, and a light topping of brown sugar syrup.

It’s sweetly delicious and ice cold, which makes it the perfect treat for the blistering Malaysian temperatures.

For the most famous (and delicious) variation on this tasty dessert, check out the Joo Hooi Cafe. It is on Jalan Penang in George Town. There’s always a line outside the stall, but the vendor moves quickly, so you’ll never have to wait long.

This doesn’t come close to being a comprehensive list. There are thousands of different Penang street food dishes. Each one is more delicious than the last. If you find yourself near Penang you can (and should) try whatever you want. But you can’t go wrong with any of the items on our list. We highly recommend trying each of our dishes (especially if it looks a little intimidating to you at first glance).