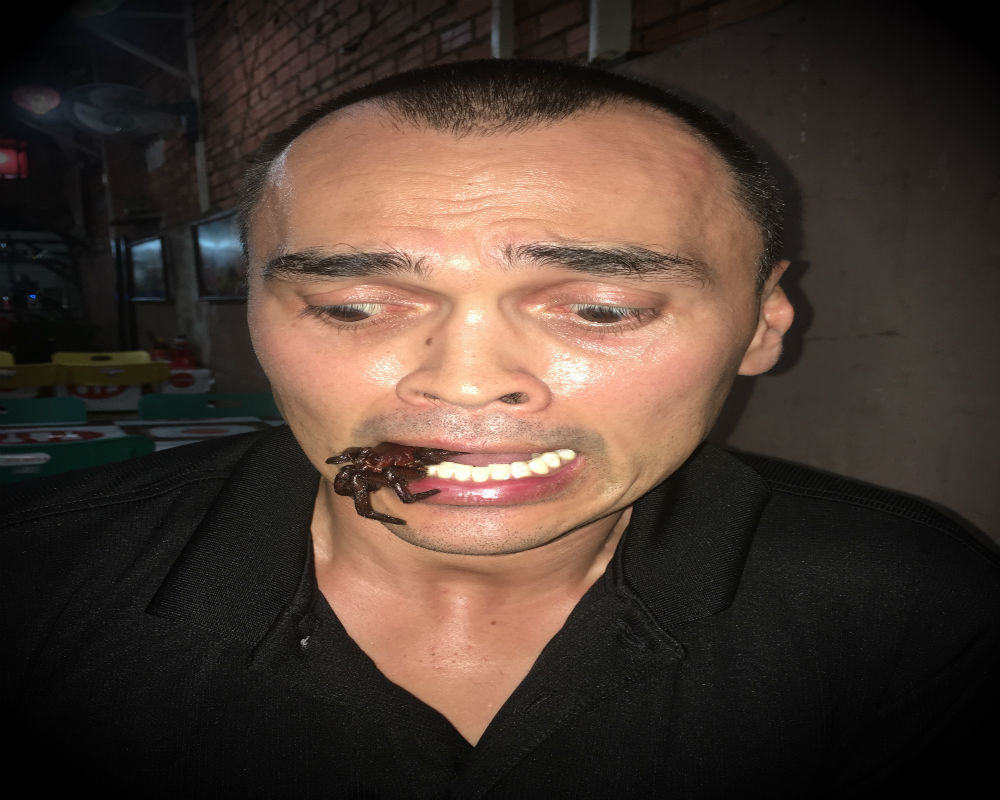 Posted at h in Vietnam by 62 Comments

We ate the creepiest Vietnamese food at Saigon’s weirdest restaurant – and survived. The tarantulas and scorpions looked dangerous, but surviving only meant that we didn’t run away screaming or hurl all over the table. Even so, we are oddly proud of this Vietnamese food adventure. We put ourselves to the test by putting some seriously scary and disgusting things in our mouths. 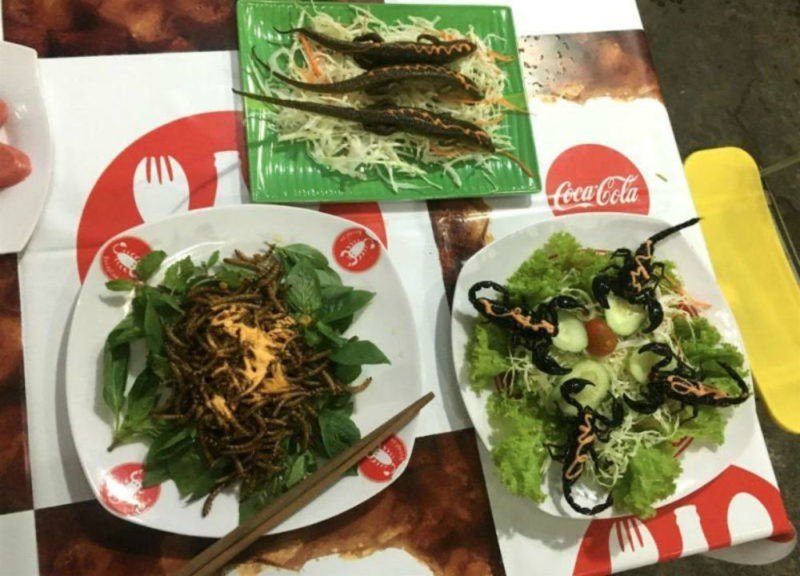 “The scary Vietnamese food was a bigger challenge for me than for Steve. I’ve done everything from skydiving to swimming along Bull Sharks (no cage!), but all creepy crawlies make me cringe, especially tarantulas. I grew up in Texas, where everything is bigger – including tarantulas.”

“As a girl, I had a few terrifying experiences with tarantulas. I guess I was about 4 the first time I saw one. It looked like a hairy giant to me, and I was scared to death. Those terrifying images of a monster spider were burned into my brain. Even as an adult who knows better, that childhood fear can still be powerful when I see a spider. This wasn’t going to be easy.“ 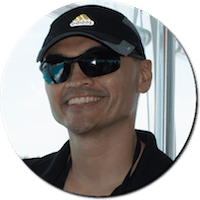 “I was very proud to see my wife conquer her fear of tarantulas. I tried to be as helpful and supportive as possible, but I admit that it was also fun to watch her squirm. After all, there was no real danger, and I knew she could do it. This wasn’t exactly going to be easy for me either. I didn’t have any strong fears, but gross is gross.” 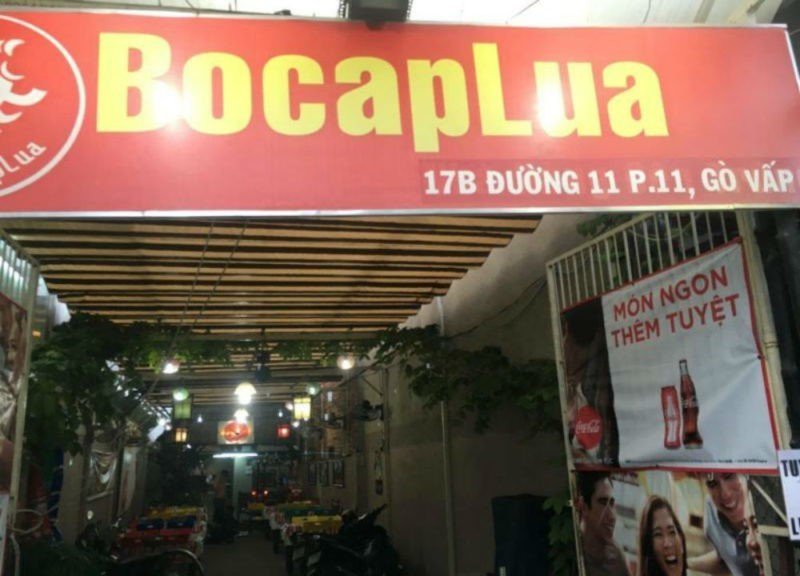 The restaurant was Bo Cap Lua. Even Saigon locals think of it as an edgy restaurant. They take Vietnamese food from exotic to extreme, with the widest selection of disgusting dishes in all of Saigon. We decided to baby-step to the tarantulas and ordered these five courses of creepy cuisine: 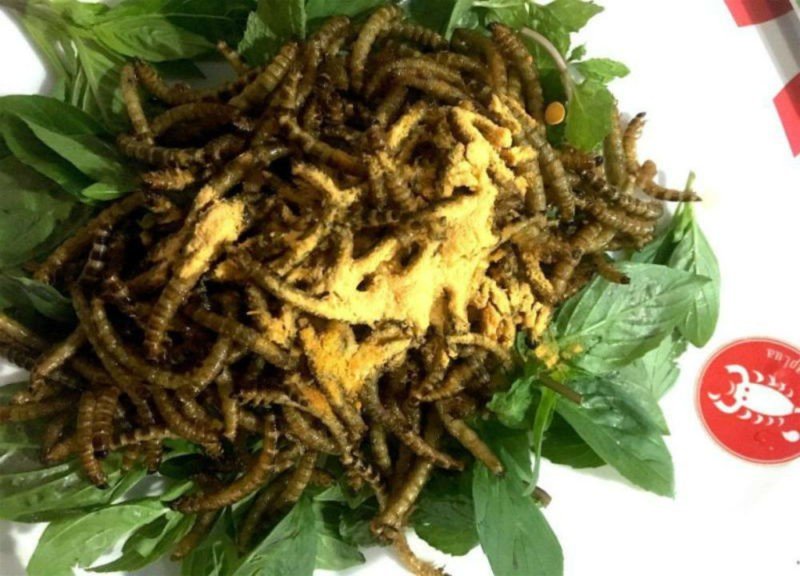 The Bamboo worms were uneventful and a great way to begin. They were crispy, crunchy, and rather bitter. We didn’t enjoy the bamboo worms, but they were such a relief. We expected to be totally grossed out, but they tasted like normal food. We started to relax and let our guard down a bit. This was a big help because our next course was a doozy. 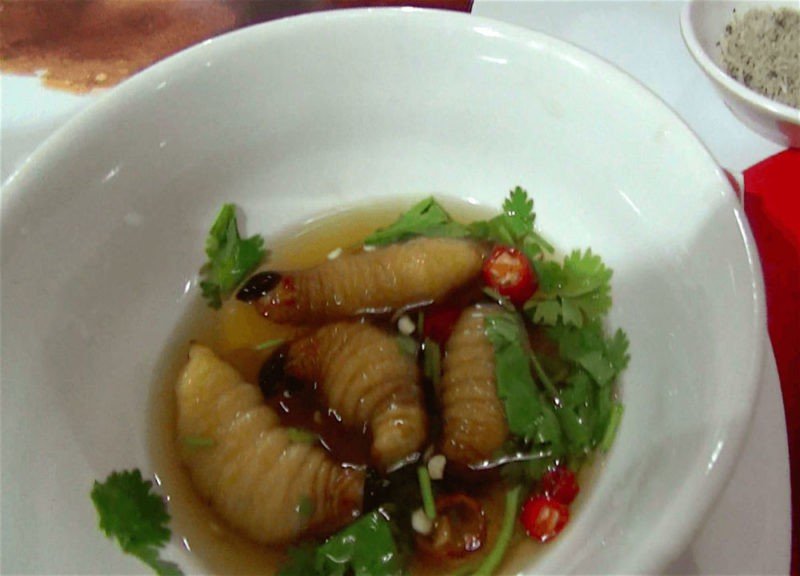 “Eating the live coconut worms was the biggest surprise of the meal. It was much more difficult than expected. Our worms were almost big as a thumb and surprisingly strong. And since they’re worms, they have a segmented body and the ability to expand. “

“Imagine putting that in your mouth, whole. Our waiter taught us the right way to eat them with lots of miming and just enough English. The trick is to eat the body but not the head. All you have to do is pinch head, insert worm body in mouth, bite off body, discard head, and enjoy. Something got lost in translation. This simple procedure became the most dramatic moment of the night. We had similar experiences and emotions eating the live worms, but Vanessa’s was more intense.” 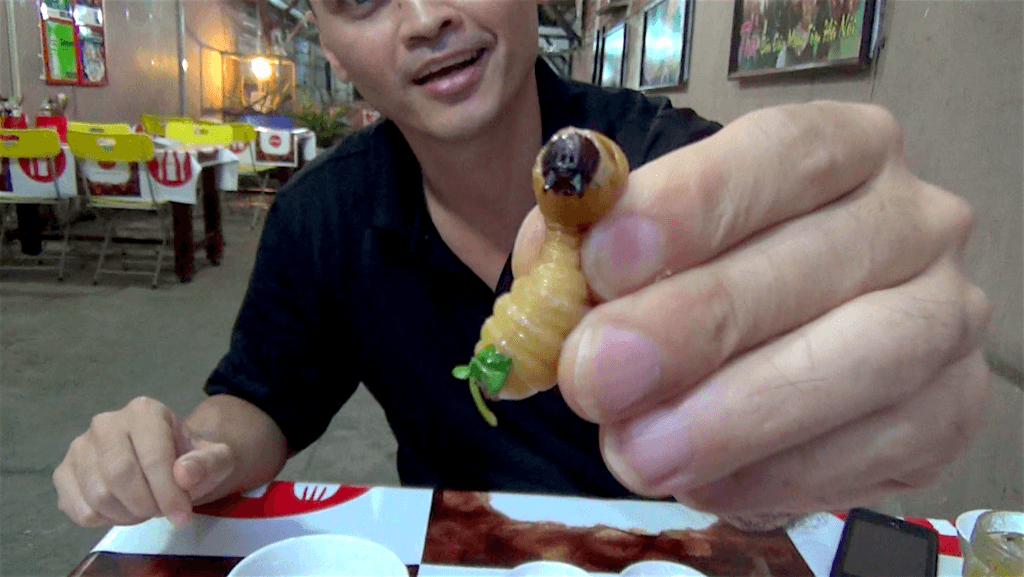 Everything is better with Cilantro.

“The coconut worm whipped around with such power I could barely hold on at first. My grip was too loose. It worked its head free enough to almost snag me with its pinchers. Yikes and damn. The idea of eating a live worm was already gross. And now I had a tinge of fear, too – about a worm. I felt embarrassed and wanted to scream. But I held it together, readjusted my grip, and lifted the worm to my lips.”

“I just wanted to get it over with. I quickly shoved the worm’s body in my mouth and bit down. But this coconut worm was a little tank. My first bite didn’t even break the skin. And that’s when I really began to feel the big worm’s power.” 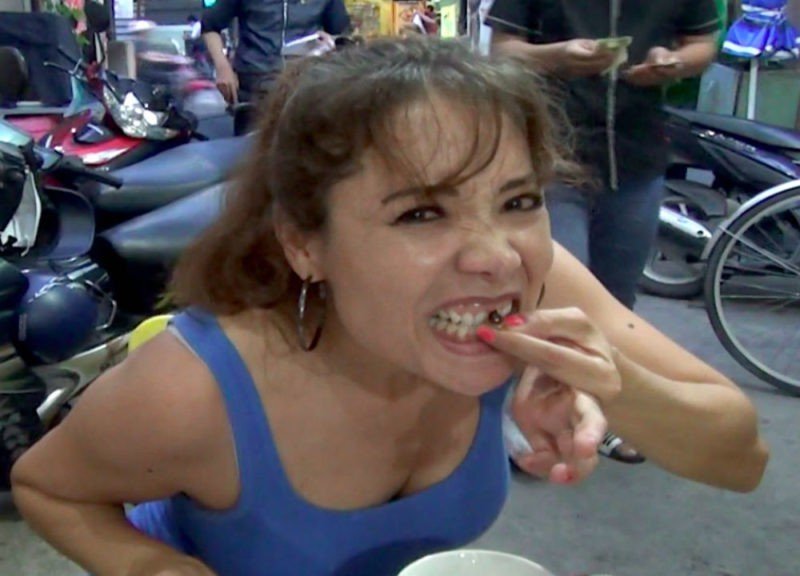 I could feel it wiggle on my tongue. Gross!

“This was taking too long. The worm began to wiggle and writhe in my mouth. I felt its rough skin scrape against my teeth, across the roof of my mouth, and all over my tongue. Frantic, I bit down again. As hard as I could. And pulled sideways.”

“The head tore free. I actually heard the skin rip. I’d never been so disgusted. Instinctively, I knew what was next. Time slowed down. The few milliseconds of waiting lasted an excruciating eternity.” 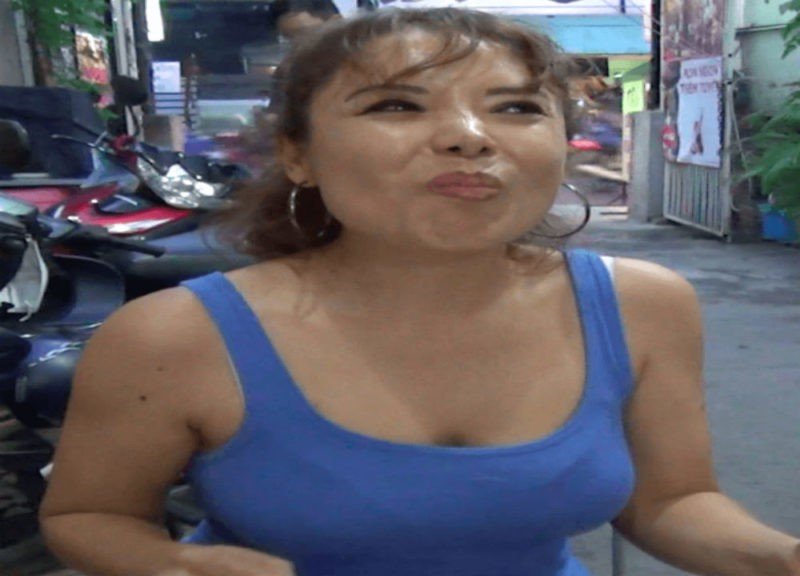 A split second of agony, waiting for the guts.

“…And worm guts splattered my tongue. Hot, gooey guts oozed through my mouth. My stomach turned. My body clenched. I prepared myself for the worse. Then I actually tasted it, and I could breath again. When I forced myself to stop thinking of it as gross and just experience honestly, it became surprisingly pleasant. It tasted a lot like coconut, mildly sweet, with a creamy texture.

Would I eat coconut worms again? Only if I had to in a zombie apocalypse scenario, but if I had to, now I know that I can.” 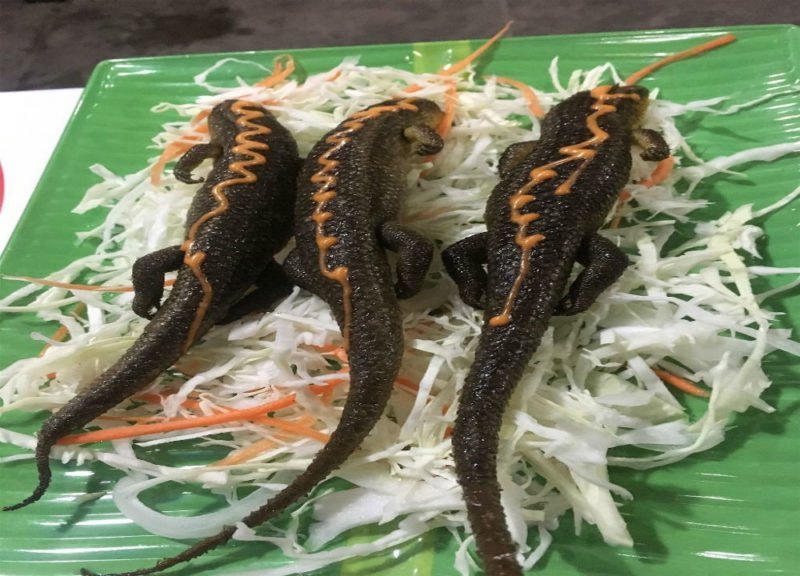 We knew the lizards were grilled, but they looked too life-like. Maybe it was an optical illusion. Maybe we were hyper-sensitive after the live worms. But the lizards seemed to be squiggling on the plate. We didn’t think the lizards were going to be this creepy.

We ordered the lizards primarily because of their authenticity as traditional Vietnamese food. The other creatures we ate are relatively common but are novelty foods, even in Vietnam. The lizards (Ran Moi in Vietnamese) are a typical delicacy of the Mekong delta that has gone mainstream. You can find it on the menu at many restaurants around Saigon. Mainstream, but still creepy with their gaping mouths and illusory wiggles.

Not as bad as they look.

Since eating big fat worms that actually wiggled had just raised our creepy threshold a few levels, we chomped down with very little hesitation. We ate them whole, scales, bones and all. The flavor and texture of the meat and skin tasted like a hearty fish. The bones are not so great. They are relatively soft and completely edible, but they are also mildly annoying. 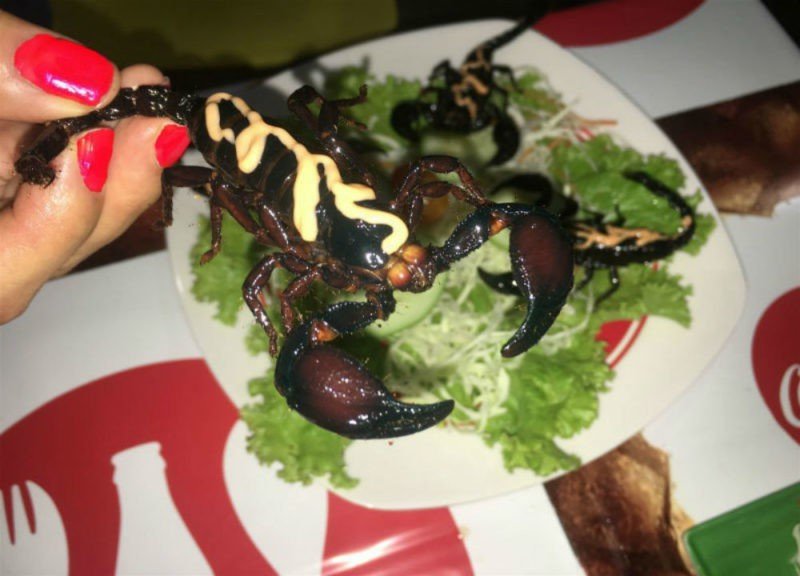 Covered in aiolo and still scary.

With the scorpions, we moved from creepy to scary. Scorpions are one of the most evil-looking creatures on the globe. Ours were clearly dead, fried, and covered with aioli – and they still gave us little shivers. 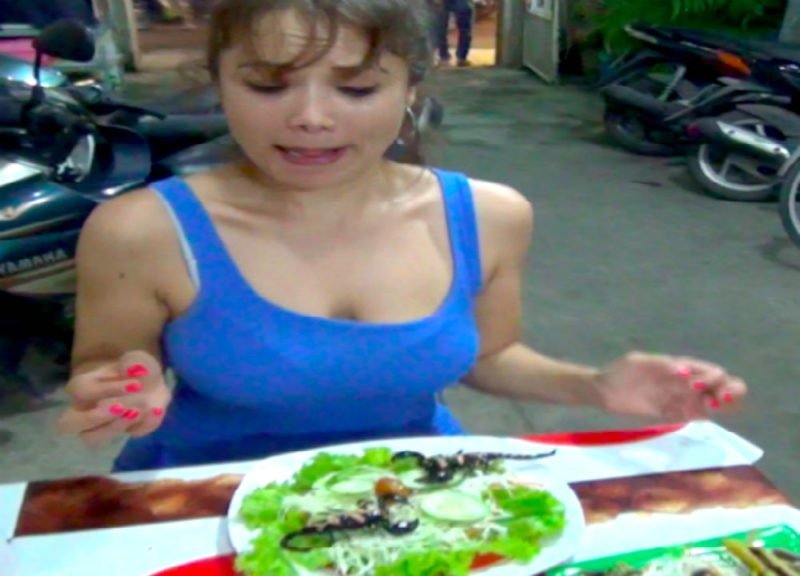 Why didn’t I just get the Pho?

It took some courage just to pick them up. Putting them in our mouths was literally spine-tingling. Our scorpions tasted as heinous as they looked, but eating them built up Vanessa’s courage to face the dreaded tarantula. 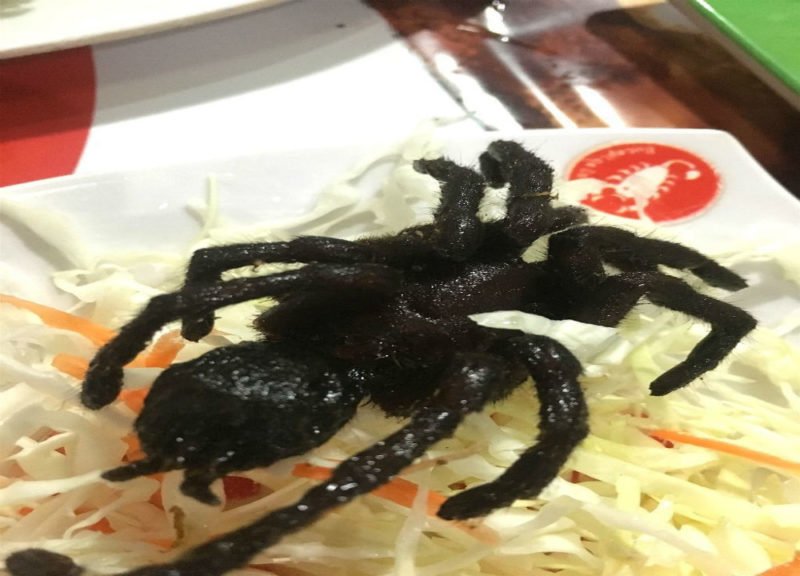 Time for the big showdown.

“I kept telling Vanessa that scorpions were objectively scarier and more dangerous than tarantulas in every way. So after eating a scorpion, a tarantula should be easy. True or not, it seemed to help motivate her.”

“I reminded her that by this point, she had conquered so many moments of fear and revulsion that she should feel invincible.”

“Steve was very encouraging. Traces of my childhood fear lingered, but I said, “Bring on the tarantulas!”

“I snatched up a tarantula and shut my eyes. I resolved to gobble it in one bite, but when I felt those hairy legs on my lips, all I could manage was a nibble. I started to put it down, but Steve was shaking his head. “That doesn’t count,” he said. “You can do it. Take a big bite. From the body.” So I put the horrible thing back in my mouth and bit it in half.” 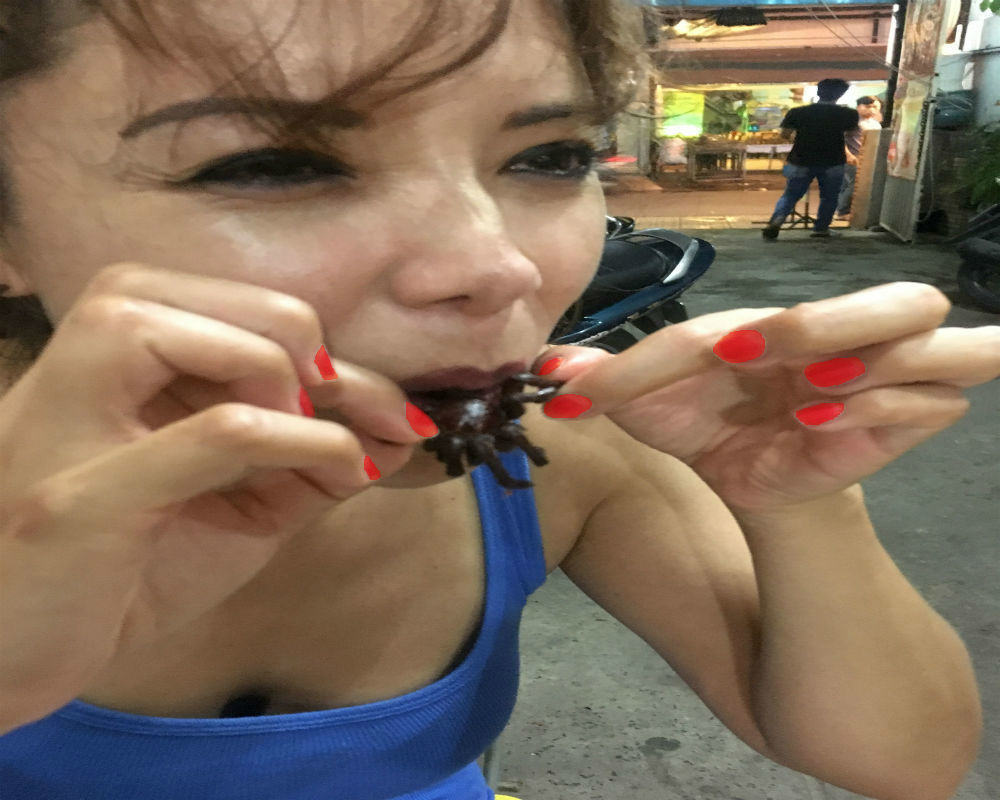 “It was nasty and bitter and utterly disgusting. I mistakenly ate the head. I tried to chew and swallow, but I felt a gag reflex coming. I spit out the mangled tarantula in disgust, but I felt only disgust and not fear. I took that as a victory and raised my arms in celebration.”

All that creepy Vietnamese food was an emotional roller coaster. We felt drained. Maybe it was too much for one meal, but we had a blast. Tarantulas, scorpions, lizards and worms were definitely the worst Vietnamese food we’ve eaten, but we totally recommend them.

Other Tips and Information

Many of these critters are available throughout Vietnam and much of Asia. If you’re in Saigon, BoCapLua Restaurant is one of the best places to experiment with these dishes. BoCapLua is a clean, sit -down restaurant with decent bathrooms. They have a huge menu of creepy cuisine and great reputation with locals. The menu is not in English, but there are pictures of every item. Ordering is very easy.

The only drawback is that it’s located in the northern District of Go Vap. The restaurant is about 45 minutes from the tourist area of District 1, but it’s not a difficult trip.

What’s the weirdest food you’ve ever eaten? Would you try any of the items we tried? This restaurant serves bats! Would you try bats?

Share
Pin
Tweet
You May Also Enjoy:
Tao Dan Park - Why it’s an Authentic Place to Meet Locals in Saigon