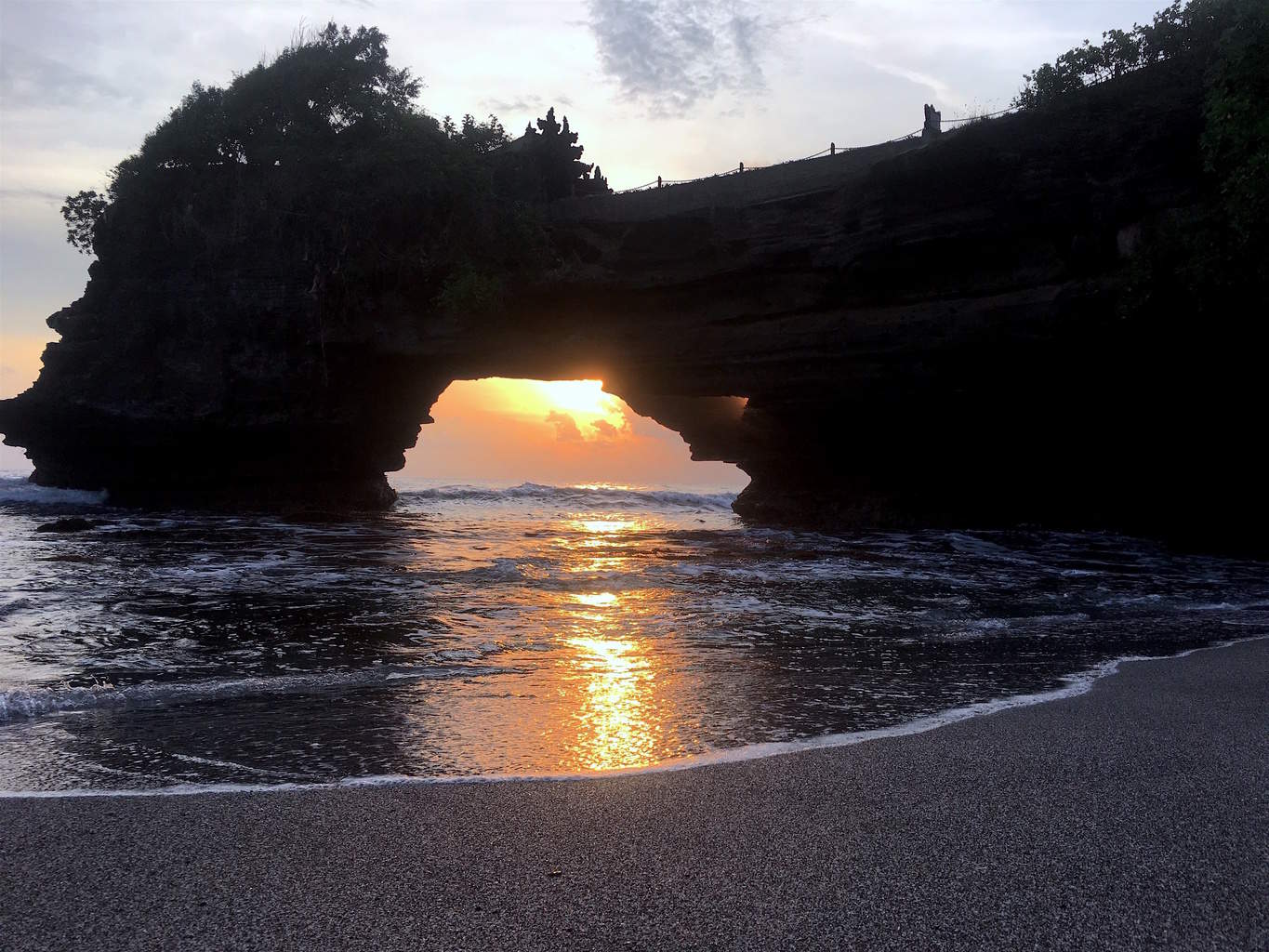 Posted at h in Indonesia by 34 Comments

We found a way to escape the sunset crowds at Tanah Lot in Bali, Indonesia. It required that we break a little rule, but the reward was one of our most exotic and memorable sunsets. It was worth it!

We found a secluded beach surrounded by horseshoe cliffs, gentle waves, and an ancient temple towering above. As we strolled along our “private” beach, we couldn’t help feeling like renegades and VIP’s. With Balinese sand in our toes, and the Indian Ocean splashing our ankles, we enjoyed a sunset better than we dreamed.

With Balinese sand in our toes, and the Indian Ocean splashing our ankles, we enjoyed a sunset better than we dreamed.

The Layout of Tanah Lot

To understand our story you have to understand the layout of Tanah Lot. “Tanah Lot” is sometimes used as a general term for the vicinity, but Tanah Lot Temple is a specific Hindu temple. It is the biggest and the most beautiful.

Tanah Lot is clearly the main attraction of the area, but there are several other sea temples in the immediate vicinity. Tanah Lot Temple is the one perched on a picturesque rock island, cradled by craggy cliffs, and surrounded by the gorgeous Indian Ocean.

A couple hundred yards northwest is Enjung Galuh Temple, which sits on a little peninsular cliff that juts out into the Indian Ocean. This cliff is one of the typical viewpoints for Tanah Lot. A couple hundred yards northwest of that is Batu Balong Temple, which sits on the end of a more dramatic peninsular cliff that has a natural arch. 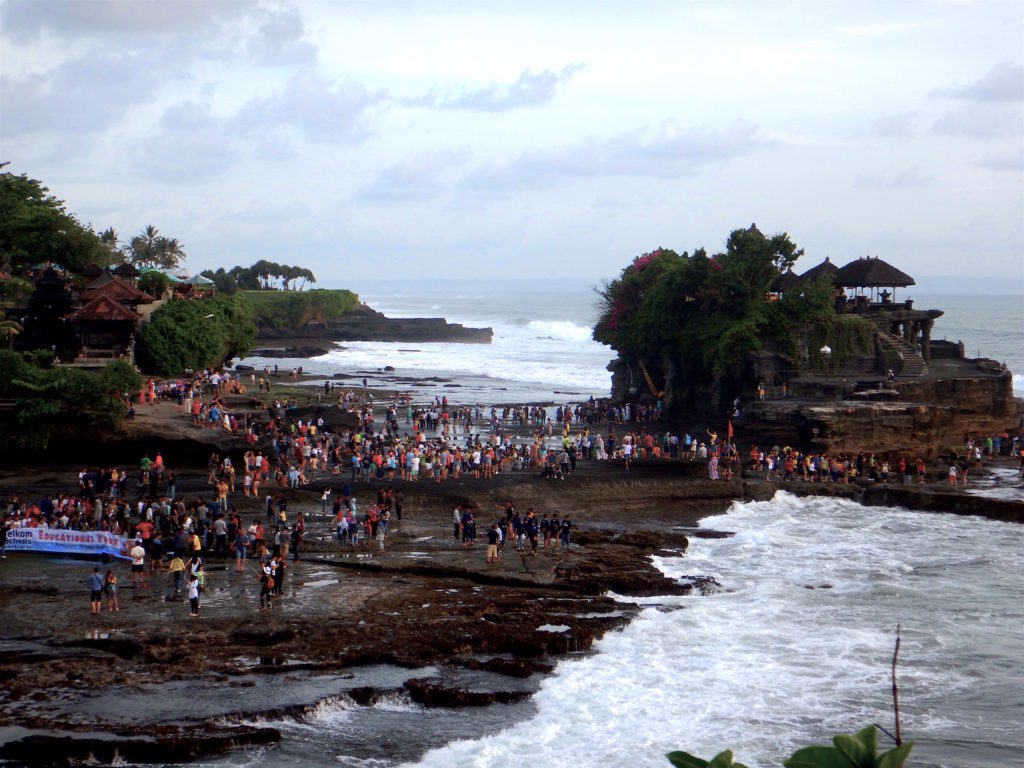 Like thousands of other visitors, we came in the late afternoon to catch the sunset. The plan was to spend some time exploring the different temples, walk along the cliffs, find the best viewpoint, and enjoy the sunset. We began our visit at the main attraction, Tanah Lot Temple.

Tanah Lot was gorgeous and amazing and worthy of its legend. But the crowds were massive. We don’t often gripe about crowds, but in this case, crowds dampened the mood we wanted for the sunset. We came to Tanah Lot seeking a magical mix of ancient spirituality and awesome natural beauty. And we wanted to sneak in a few sunset kisses. We didn’t want to share the experience with thousands of other visitors. So we decided to scope out the best places to watch the sunset, hoping for the least crowded spot. We knew the 3 typical viewpoints.

Terrace Cafes – There was a large and well-developed terrace on the cliffs directly above Tanah Lot temple. It sat just east of the temple, so it had a great angle to view the sunset. The several cafes here were a convenient way to toast the sunset with a few drinks. Great option, but on that day, we wanted to get away from people and be closer to nature.

Tanah Lot Temple itself – The flat rocky reef surrounding Tanah Lot temple had several nice spots, right next to the temple. This was very close to nature and very beautiful, but people were everywhere.

The Cliffs of Enjung Galuh Temple – This spot had the advantage of overlooking both Tanah Lot Temple on one side and Batu Balong Temple on the other. We could walk back and forth to enjoy both views, but this was also crowded and too far removed.

Good choices, but not quite what we wanted. As we surveyed the Tanah Lot area from the central location of Enjung Galuh, we started to feel a little disappointed. We debated going back down to Tanah Lot temple for the iconic yet crowded sunset. As we spoke, we kept looking down at the beach between this cliff and the cliffs of Batu Balong. 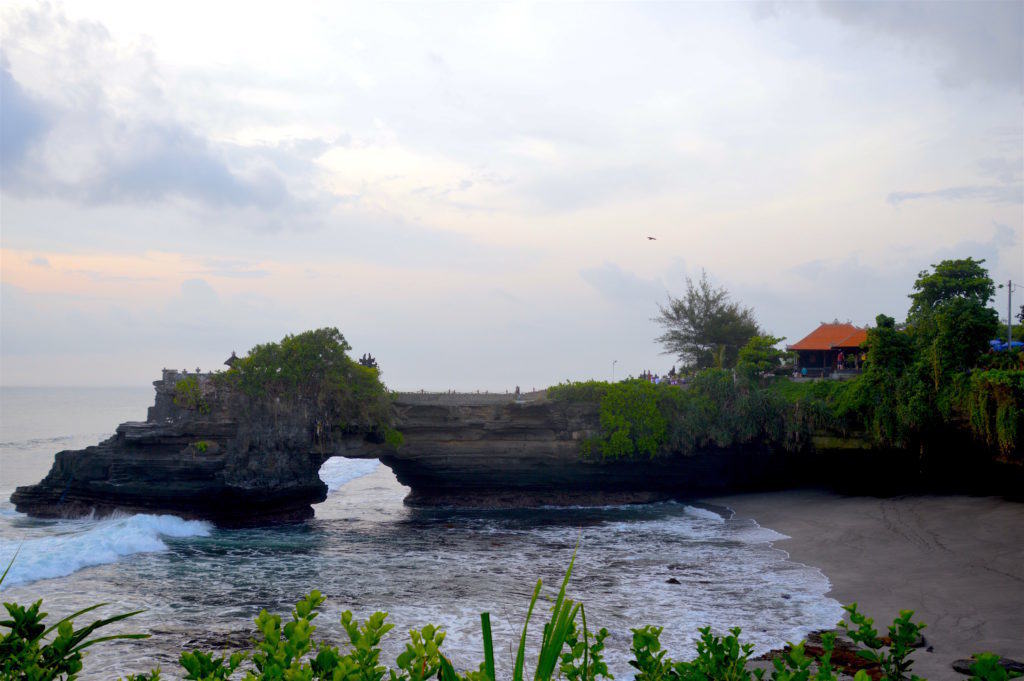 We noticed it before, but we took the bright red STOP sign to mean that the beach was off limits. Unhappy with the other choices, we started to question if it was really off limits. Then we just smiled at each other and made our decision without words. We had found our spot

It was perfect – sheer cliff walls all around, a “private” beach to ourselves, and the natural arch to frame the sunset. The only problem was that bright red STOP sign. We wondered if we’d get in trouble for climbing down to the beach. 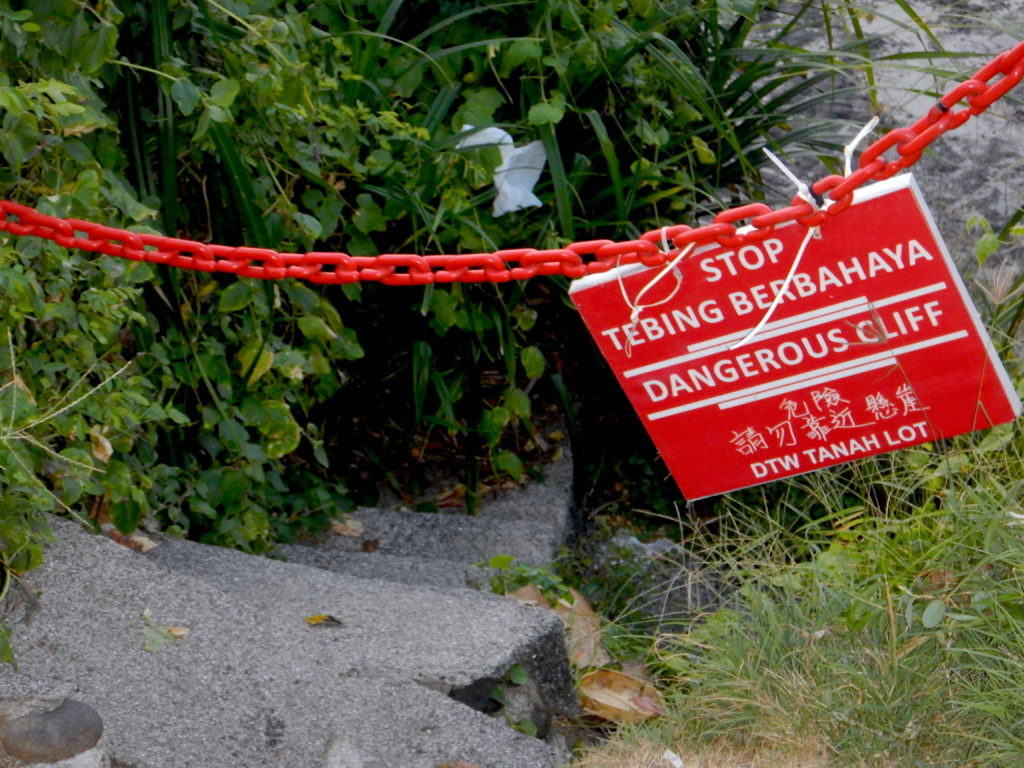 Hmmm? A forbidden path, down a cliff, to a secluded cove beach? Nothing was going to stop us. We reminded each other to be super careful, quickly looked around for any officials, and hopped the sign.

The path down was actually pretty safe. There were a few bad spots, but no real challenge. We didn’t understand why the path was forbidden, but we were so glad it was. When we got to the bottom, we were giddy with excitement. This was a different world from the tourist-packed cliffs above. 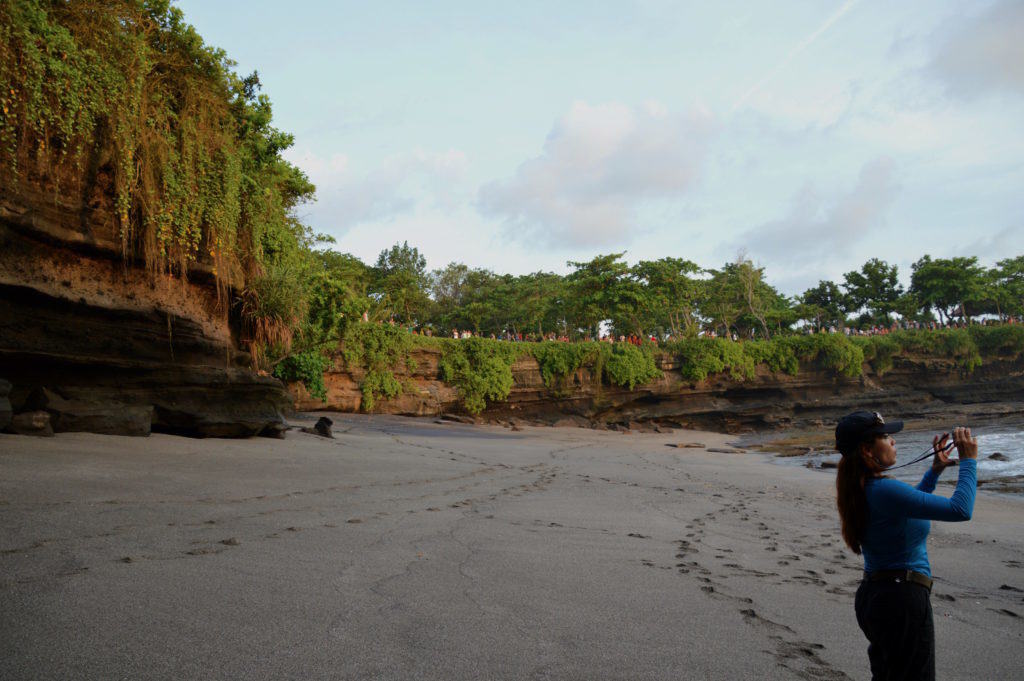 It was a beautiful sight, but the peace and quiet impressed us the most. We weren’t that far away from everyone, but we couldn’t even hear the chatter of the crowd. The cliffs around this beach form a tight horseshoe. Maybe they were an echo chamber for the waves that blocked out the noise above the cliffs. We don’t know exactly why, but all we heard were peaceful ocean sounds. 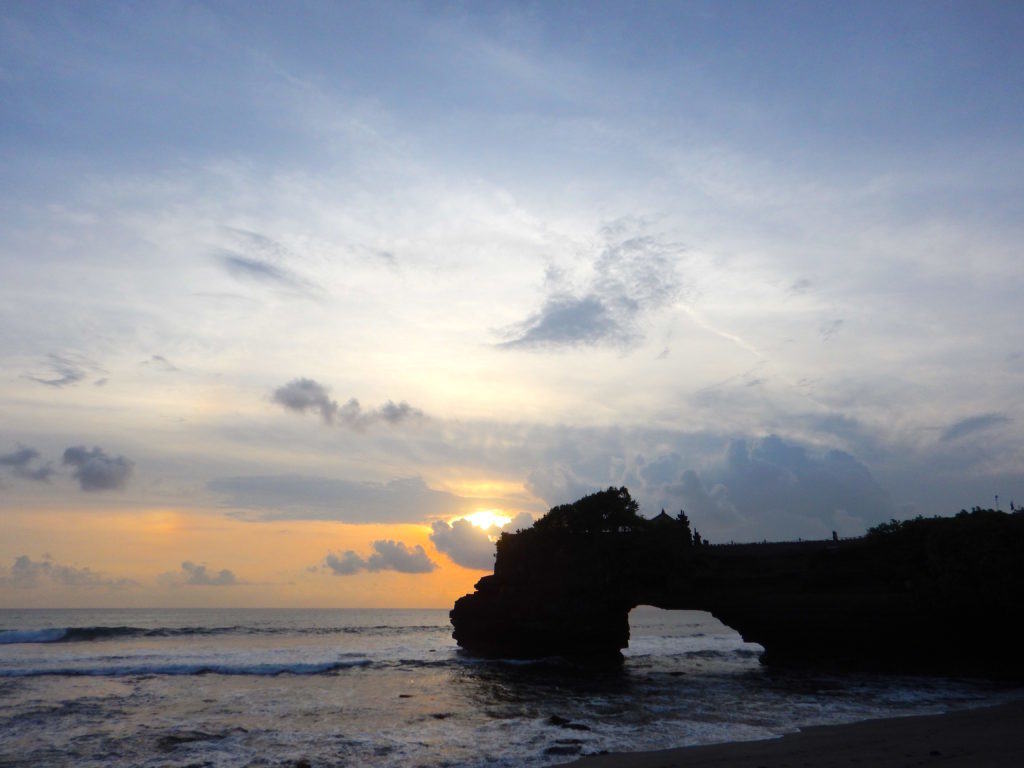 It was our own private paradise. The rock formations were beautiful and inviting. We climbed on several boulders testing different views. We spent some time in a cave, surrounded by little crabs, watching the waves roll in. Mostly we just sat on the sand, captivated by the dramatic setting. The cliffs under Batu Balong temple had a natural arch. It was the perfect frame for the falling sun. 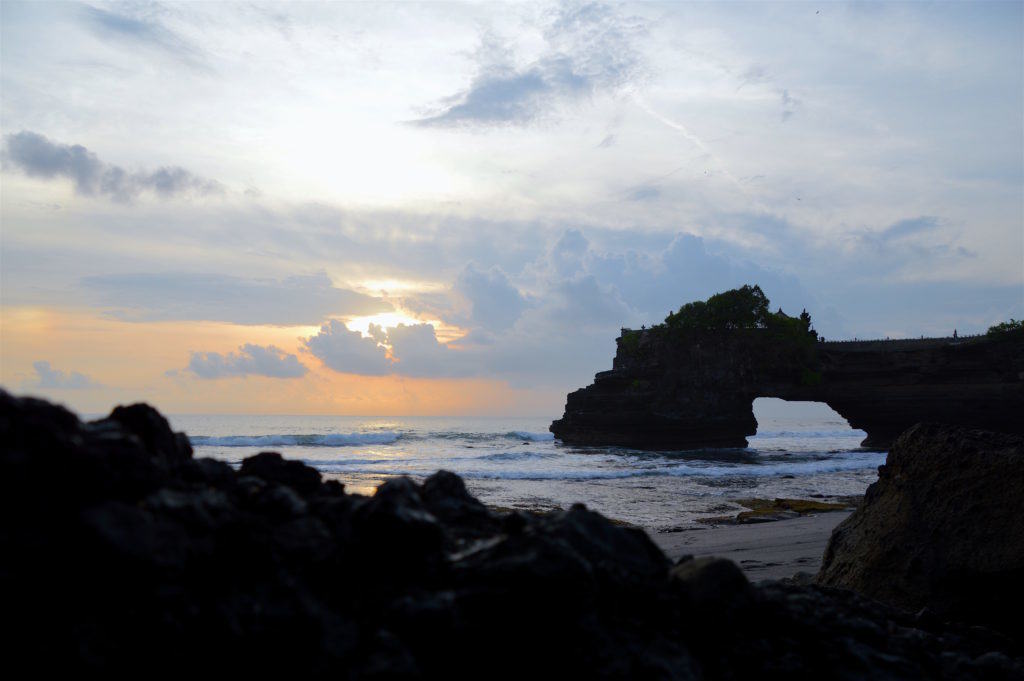 View a from nearby Cave.

Snuggling on the sand and sneaking kisses, we marveled at this impossibly romantic sunset. It was an intoxicating moment. We imagined the millions of years, and billions of waves, that carved out this gorgeous setting. We knew better, but we felt like all of it was just for this moment, just for us. 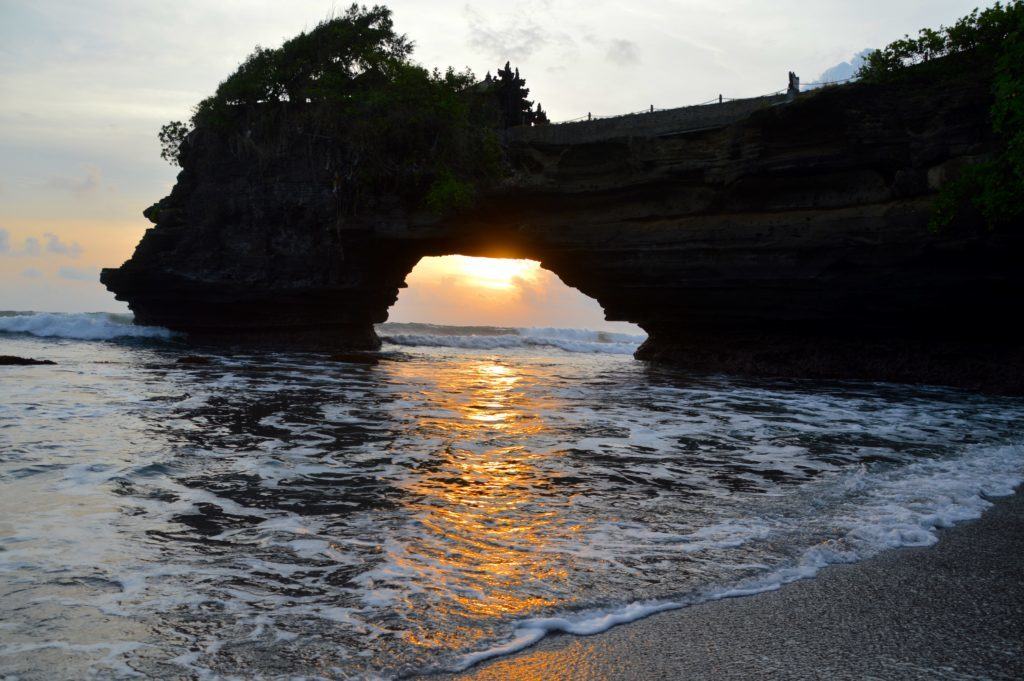 Epic View through the Natural Arch

We were elated with this spot. This view isn’t possible up at Batu Balong temple itself or the cliffs or anywhere else around. It could only be seen from the beach – and we had it all to ourselves! 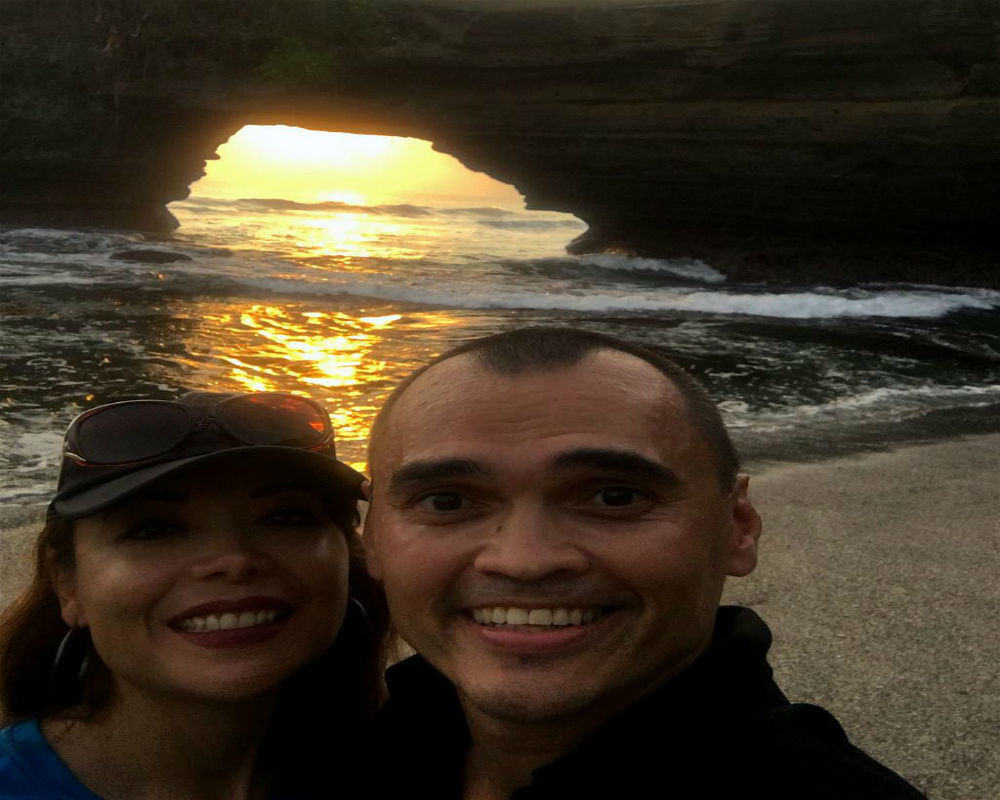 We left before the sun disappeared into the sea. That would’ve been spectacular, but we didn’t want to climb back up in the dark. We also wanted to catch the last moments of sun at Tanah Lot Temple. The sunset at Tanah Lot Temple is breathtaking. It should not be missed, but the crowds and commercialism partially undermine the serenity and sacredness of Tanah Lot. The sunset from the beach under Batu Balong temple is exponentially better.

In our opinion, the best plan is to see some of the sunset at Tanah Lot Temple, but also find a solitary spot away from everyone else. Even if that spot doesn’t have a view of Tanah Lot Temple itself. As long as its stays “forbidden” and untouched the cove beach we found between the cliffs of Enjung Galuh and the cliffs of Batu Balong is the most magical spot around.

Escaping the crowds at Tanah Lot allowed us to recapture a sense of the promised serenity and sacredness. We imagined what the monks must have felt when they built their temples so long ago. The combination of ancient temples and natural beauty was romantic, overwhelming, and inspiring. This was the magic we hoped for.

How to find the path

Face away from the temple and walk about 35 feet.

The path will be on your left.

*If you take the path, be very careful and take it slow. Make sure it looks stable to you. It may be degrading over time.