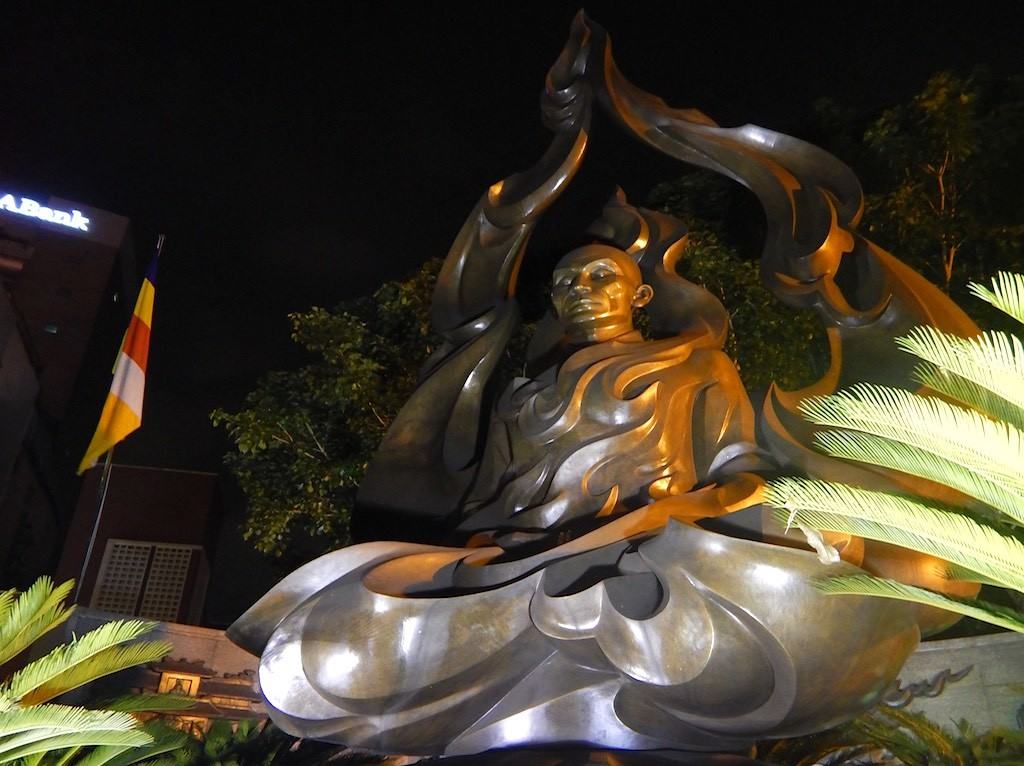 The Burning Monk Memorial in Saigon

Posted at h in Vietnam by 84 Comments

The burning monk memorial is the most powerful monument in all of Saigon. It commemorates the moment when a Vietnamese monk shocked the world with a single match.

On June 11, 1963, Thich Quang Duc set himself on fire – in protest to brutal government oppression.

Today, the monument stands on the very spot of his self-immolation.

We highly recommend visiting this site for its beauty, historical importance, and personal impact. But be warned, it’s also very moving and quite sad too.

The memorial honors the noble sacrifice of a genuine martyr, but that sacrifice was gruesome and haunting. And you’ll be standing exactly where it happened.

Visit with care. This may affect your mood far more than typical sightseeing. 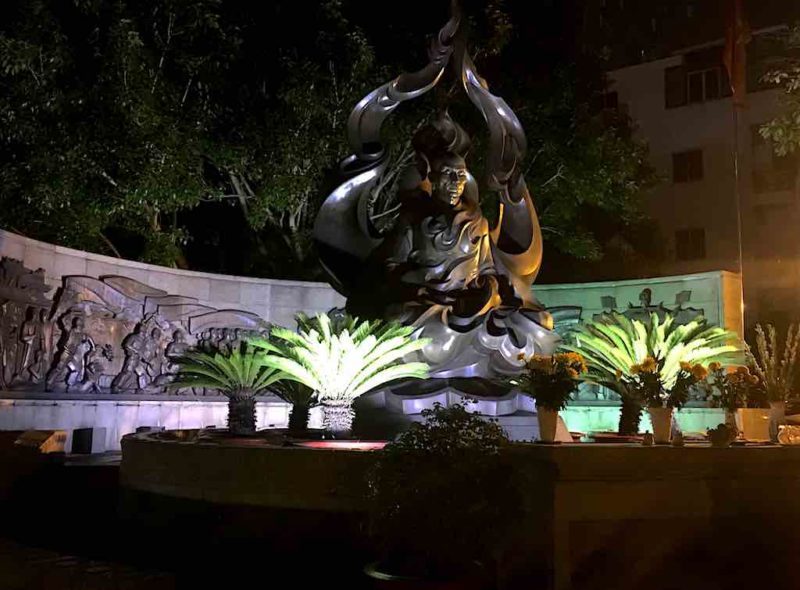 Background of the Burning Monk’s Sacrifice

From 1954-1963, Vietnam was led by Ngo Dinh Diem, a staunch Catholic. Although 70-90% of the country was Buddhist, Catholics controlled the government, military, and most of the wealth.

Buddhists were savagely oppressed in many ways. Property was seized, villages were ransacked, people starved, and some were shot in the streets.

After other forms of protest had failed, Thich Quang Duc decided to make the ultimate sacrifice. He wanted the world to know of the horrors faced by Vietnamese Buddhists and bring them to an end.

Malcome Browne captured the moment in perhaps the most famous photo of the period – titled simply “burning monk.”

Pictures of the sacrifice were published by the AP. The tragic self-immolation quickly became world news and led to the fall of the oppressive regime a few months later.

Shrine of The Burning Monk Memorial 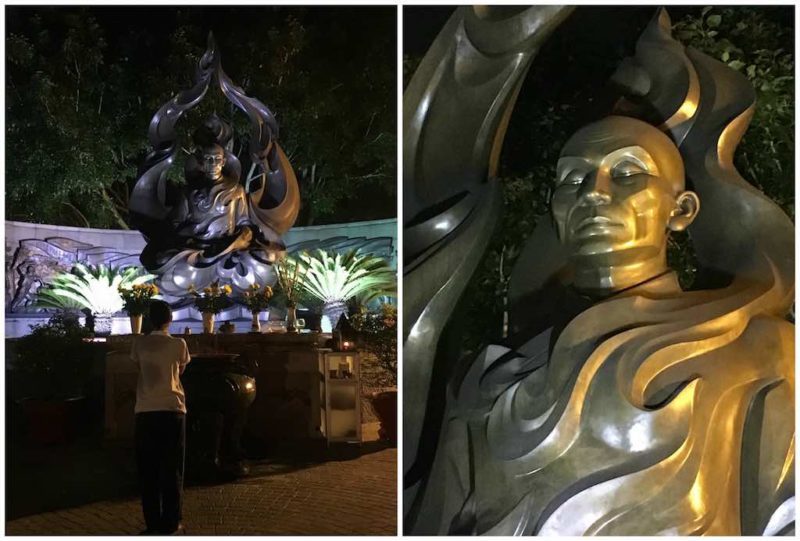 Thich Quang Duc’s super-human calm is even more legendary than his selfless sacrifice. This is beautifully portrayed in the sculpture. The flames engulf him. The agony must have been intense, but his expression is the essence of serenity.

Amazingly, this is true, not just the creative license of the sculptor. You can see his calm face in the photo. And eyewitness accounts say the same.

American journalist, David Halberstam was there on that fateful day. In his book The Making of a Quagmire, he gave this description of the scene.

“Flames were coming from a human being; his body was slowly withering and shriveling up, his head blackening and charring. In the air was the smell of burning human flesh; human beings burn surprisingly quickly. Behind me I could hear the sobbing of the Vietnamese who were now gathering. I was too shocked to cry, too confused to take notes or ask questions, too bewildered to even think … As he burned he never moved a muscle, never uttered a sound, his outward composure in sharp contrast to the wailing people around him.”

We’ve seen the video on YouTube, and that’s exactly what happened.

He just sat in the lotus position and burned for several minutes. He was silent and motionless as he died and his body fell over.

(Another word of caution: It is an extraordinary video, but it’s the real thing. It shows his death. You can’t un-see something like that.)

The relief sculpture behind the shrine visually depicts the context for the event. 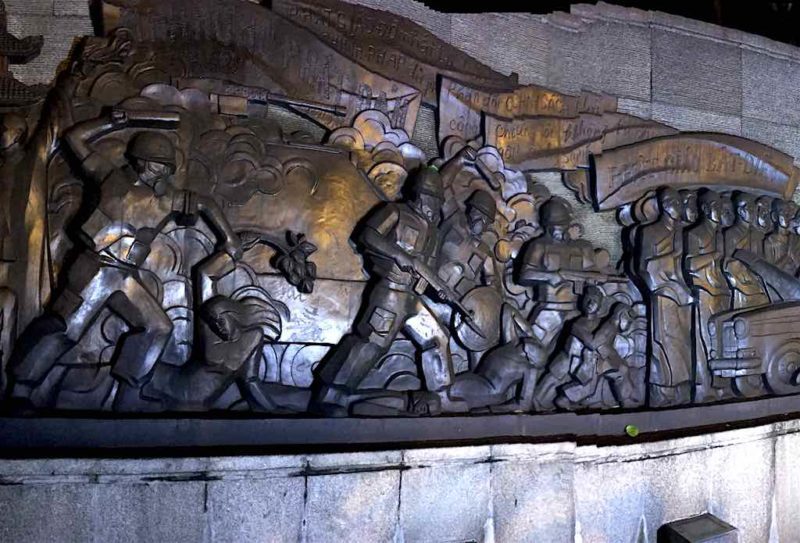 On the left, it shows scenes of brutality and the oppression of Buddhists. 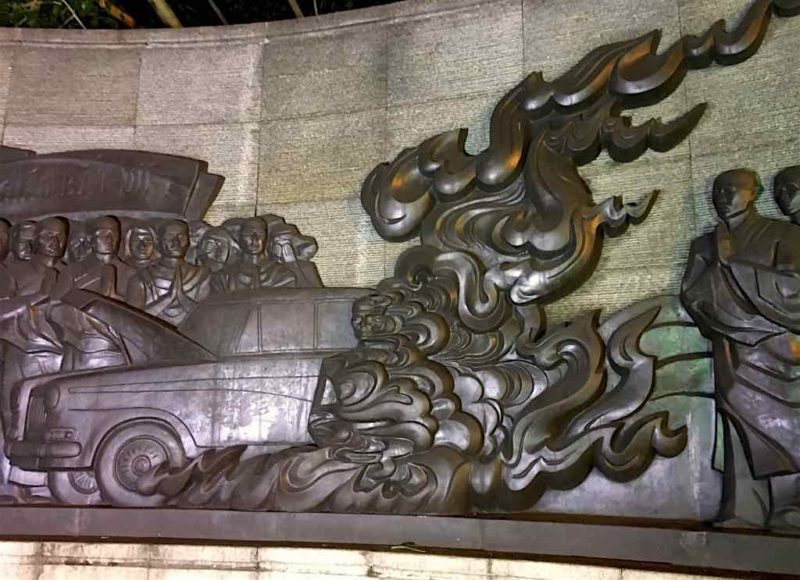 Photo-realistic Depiction of the Self-Immolation

In the middle, it shows Thich Quang Duc enveloped by flames. The sculpted image is almost a perfect copy of the photo. 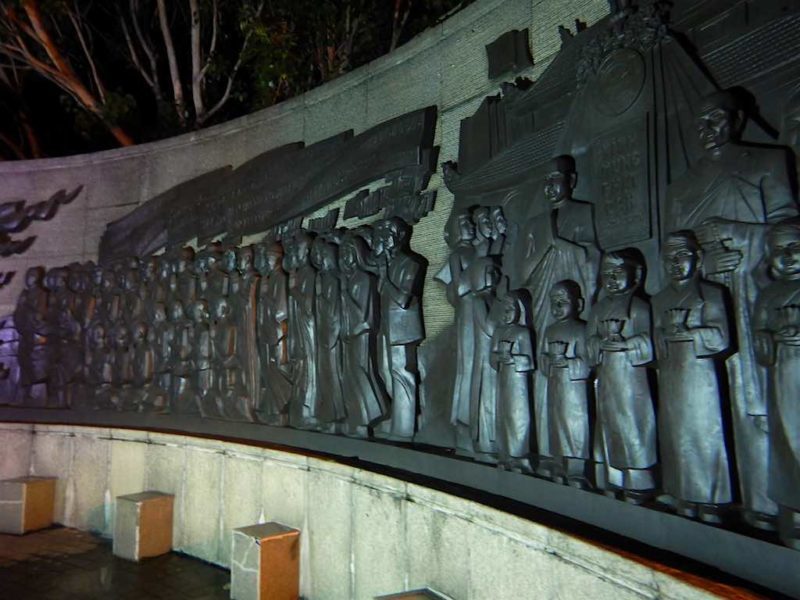 On the right, it shows the positive effects of his sacrifice. People are liberated and freed from oppression.

The Burning Monk Memorial is open all day, but we suggest visiting at night. It’s much more beautiful and poignant in the dark.

Also, our mood after visiting is pretty reflective and somber. We prefer this to be the last activity of the day.

It’s a public monument. There is no entrance fee.

‪The monument is at the intersection “Cach Mang Thang Tam” Street and “Nguyen Dinh Chieu” Street. That’s in District 3 of Ho Chi Minh City, about a 20-minute walk from the tourist area of District 1.