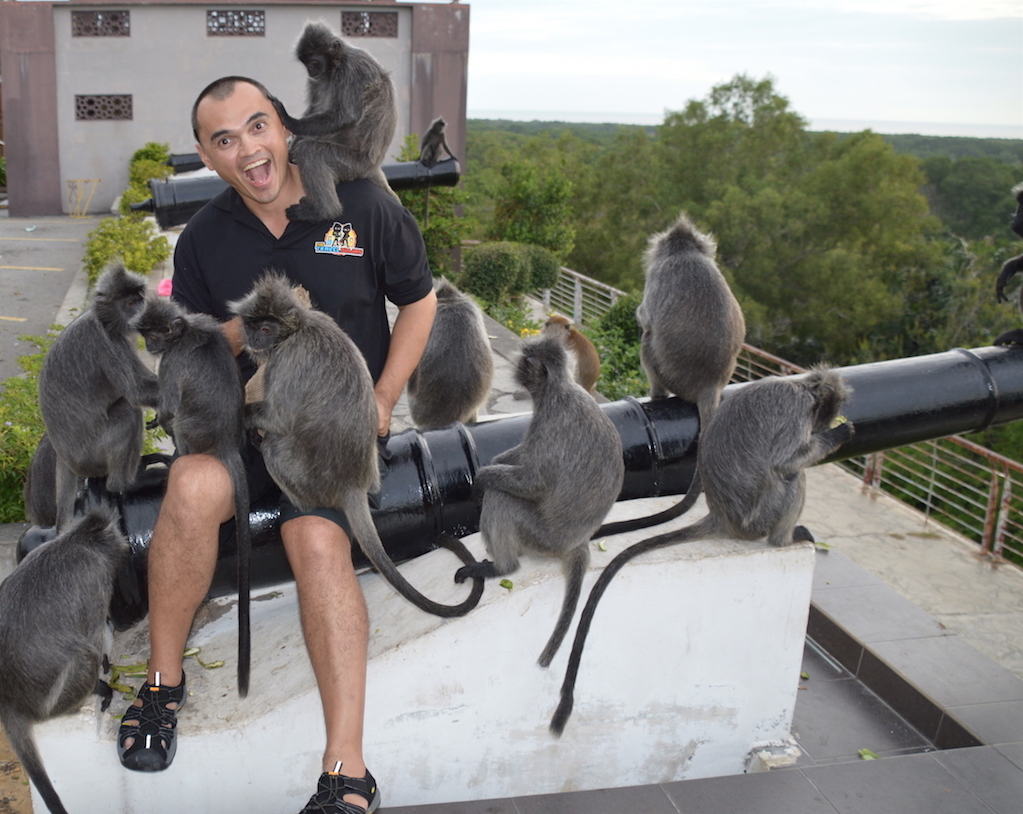 Posted at h in Malaysia by 78 Comments

If you love monkey encounters, Bukit Melawati should be on your Malaysian itinerary. It’s only 60 minutes from Kuala Lumpur. Bukit Melawati is primarily a historical site with great hilltop views, but it’s also home to hundreds of silver leaf monkeys. These monkeys freely roam the site and will steal your hearts. They are so different from the macaques that you’ll see around Southeast Asia. Silver Leaf Monkeys are extremely gentle, playful, and curious. We love the macaques too, but the silver leaf monkeys are our new favorites. 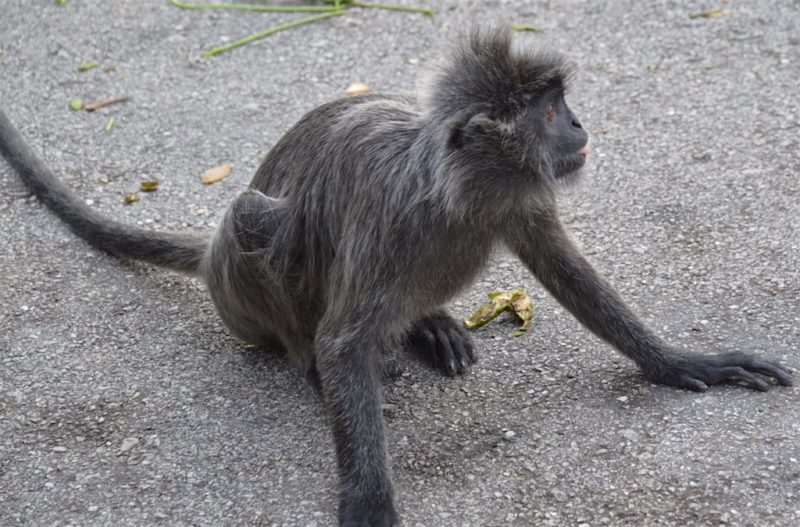 While you can watch and even interact with monkeys here, Bukit Melawati is not an animal “exhibit.” These monkeys just happen to live in the area. Bukit Melawati overlooks the Selangor River and the mangroves that surround it. These mangroves are the monkey’s natural habitat. There are no enclosures, no cages, no handlers, and no shows. The silver leaf monkeys are somewhat like the llamas of Machu Picchu, except the monkeys totally come and go as they please.

Bukit Melawati is not an animal “exhibit.”Click To Tweet 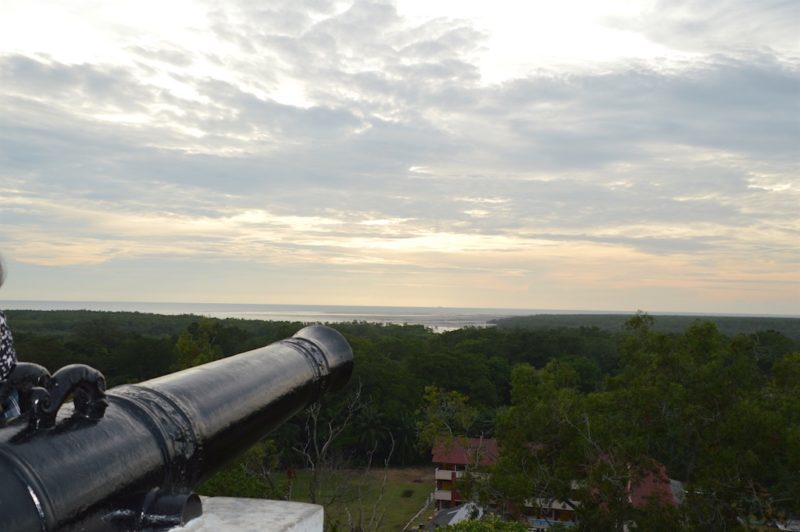 Canon aimed at the Straights of Malacca

Bukit Melawati is the site of a hilltop fortress that dates back to 1782. The local leader, Sultan Ibrahim built the fort to fend off European Invaders. This hilltop was the highest in the area and had 360° sight lines. The fort had views of the nearby waterways and several big cannons poised to demolish approaching forces. 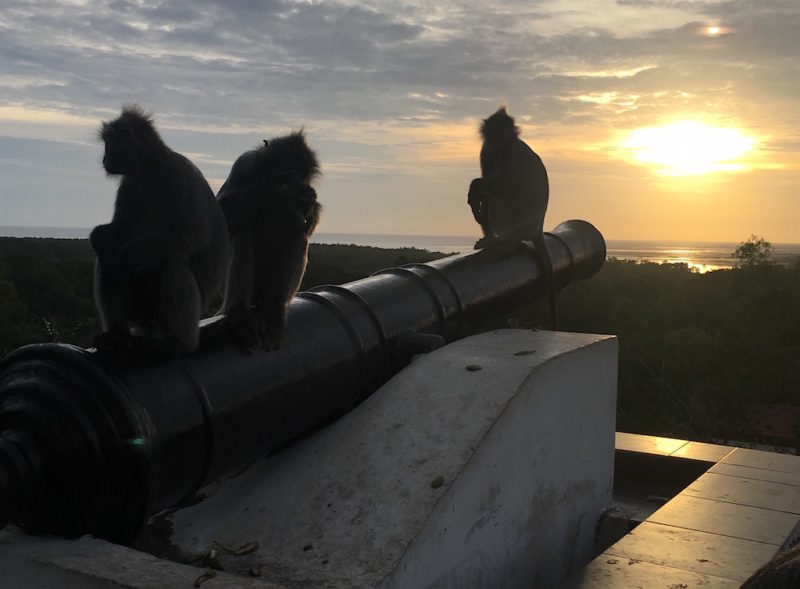 The strategic location of the fortress did not guarantee victory. Possession of the fort was passed back and forth several times between the Malays and the Dutch armies. 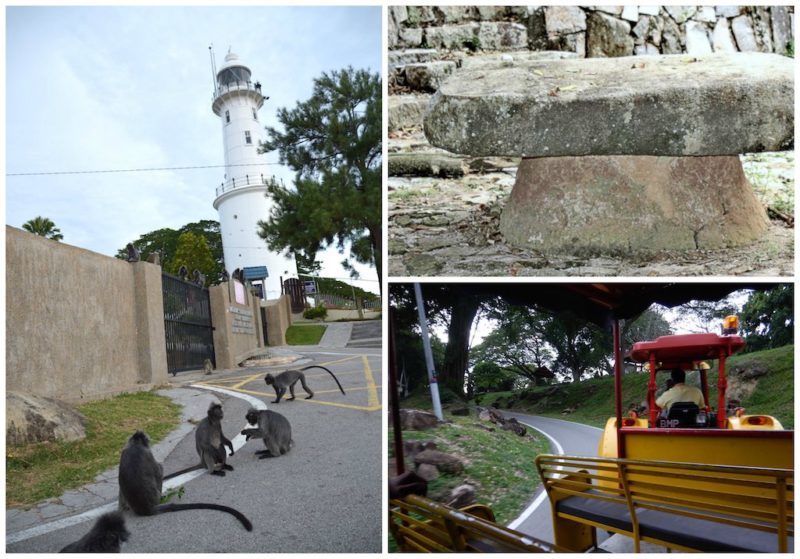 After all those battles, only parts of the original stronghold remain. Bukit Melawati’s other relics include a lighthouse, an executioners stone, a poisoned well, and the royal graves of 3 sultans. There is also a small museum commemorating the site’s history. 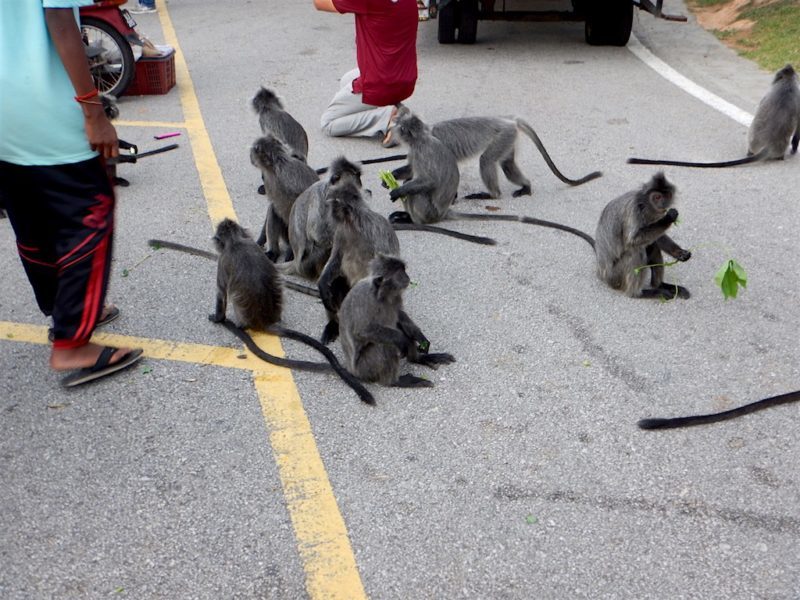 There are a few possible interactions with the Silver Leaf Monkeys here. The first is simply observing them up close – outside of a zoo environment. 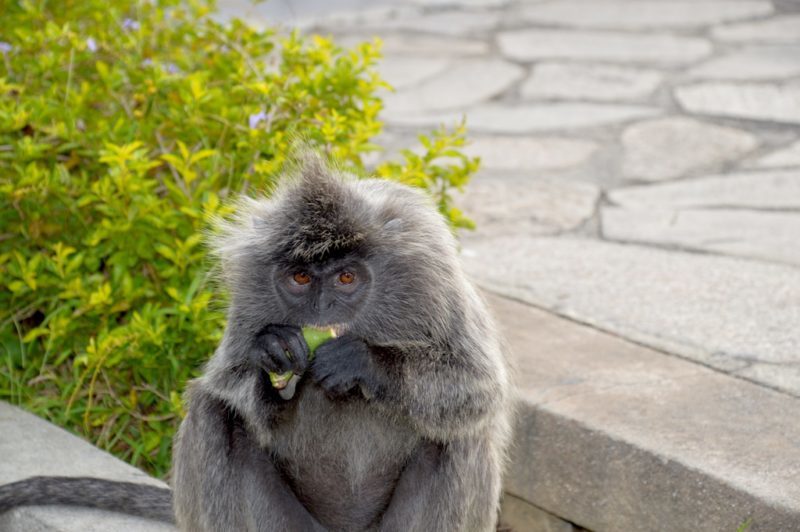 We’ve been on wildlife observations where we were happy with brief glances at far off monkeys. Being so close to these sweet monkeys is a privilege because Silver leaf monkeys are pretty rare. On the whole planet, they only live in a few places around Southeast Asia. 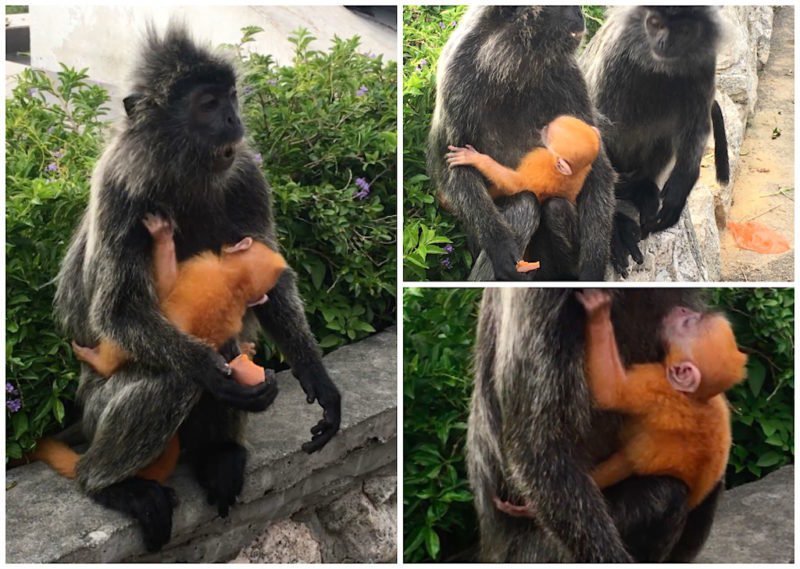 Seeing babies animals are always an adorable treat. We were lucky to see a couple babies. We couldn’t believe the babies were bright orange. 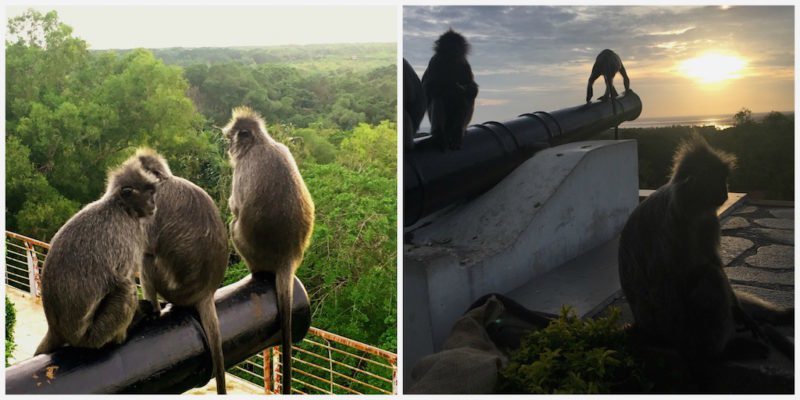 There are monkeys all over Bukit Melawati, but the canons seemed to be VIP seating. The monkeys really seemed to enjoy chilling out and watching the sunset. 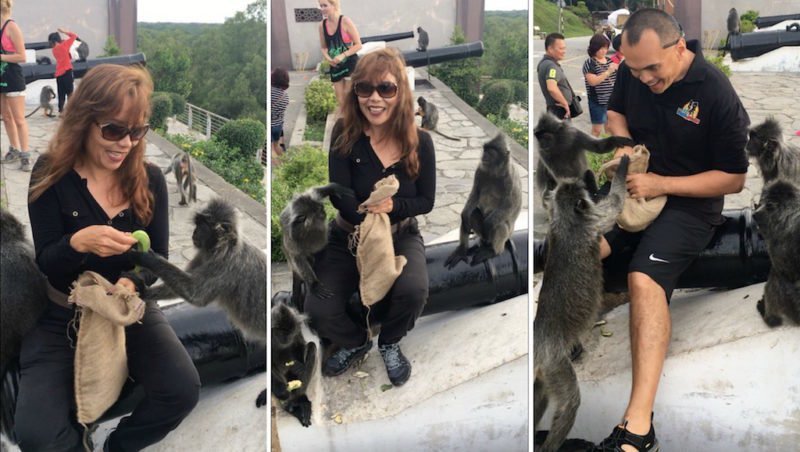 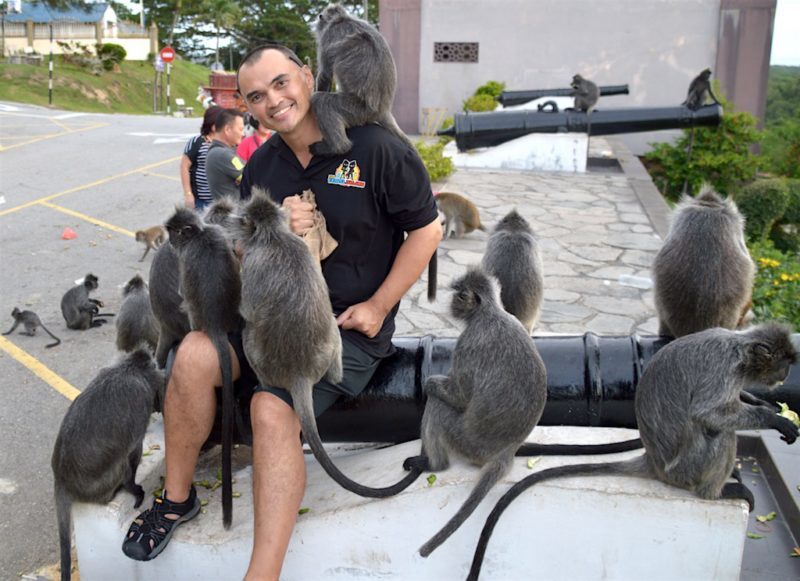 Several approached and sat on us during feedings, but we were always safe and comfortable. They got our attention with soft touches and light taps. They had quick hands, but they were also very accurate and gentle. We never sensed an ounce of aggression from the monkeys, not toward us and not toward other monkeys. 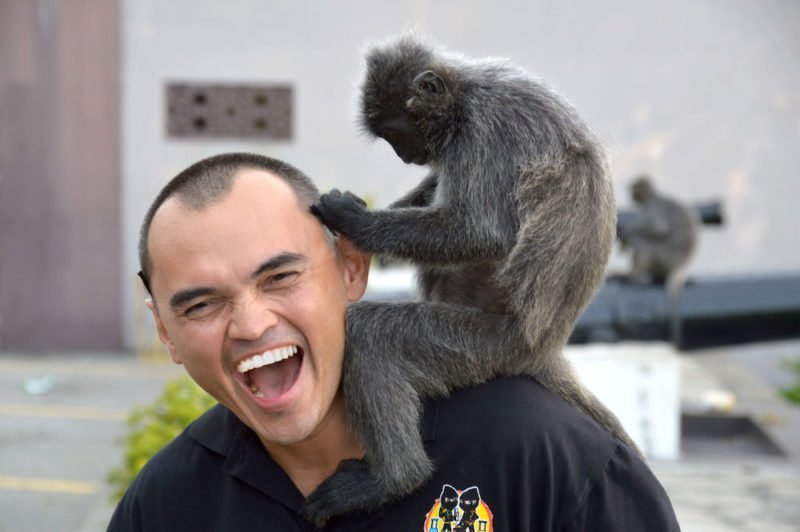 Steve Getting Tickled by a Silver Lear Monkey

A really cool aspect of the experience was seeing the individual personality differences from monkey to monkey. Some got a banana and took off. Others got a banana and ate it right next to us. When the bananas were finished, many of these left us in search of more. This was what we expected, but a few monkeys surprised us. This smaller group stuck around after our bananas were gone. 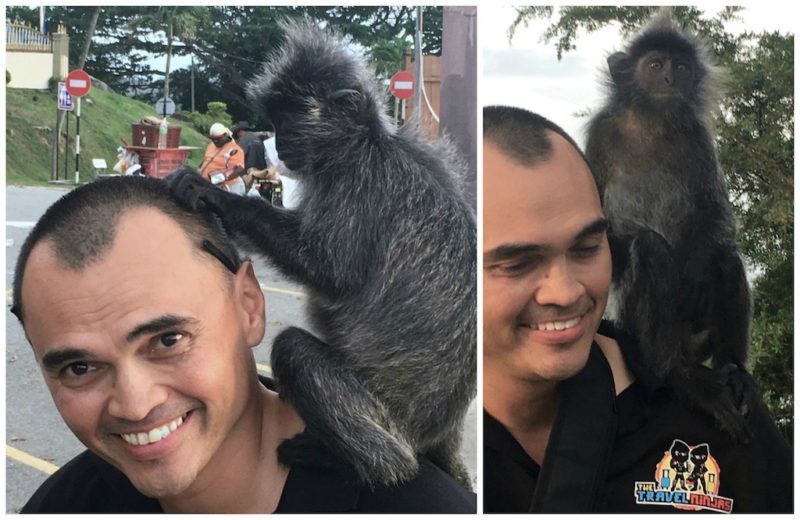 One particular monkey stayed around for a long time. She was very social in the monkey way. She put her finger in my ear, groomed me for bugs, and sat on my shoulder for 5 or 10 minutes. It was so cool.  We were amazed. There were other people feeding monkeys nearby. The monkey had an easy source of food. She knew we didn’t have any more, but she decided to hang out with us anyway. We’re no experts on monkeys, but it certainly felt like she was socializing. 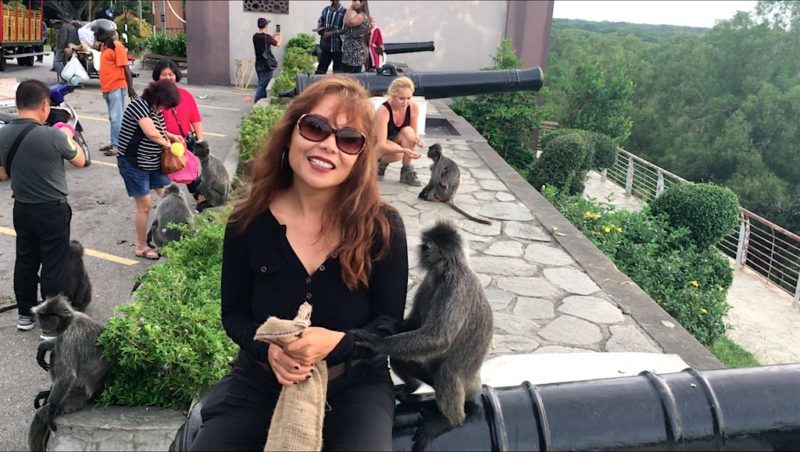 The Silver Leaf Monkeys Lighten the Mood at This Military Site

Bukit Melawati is one our favorite day trips from Kuala Lumpur. It’s only an hour away from the city, and it has so much to offer. It’s a centuries-old hilltop fort with a lighthouse and a rich history. The hilltop location also makes Bukit Melawati a nice spot to enjoy the Malaysian countryside. The sunsets are especially pretty. And best of all, the gentle Silver Leaf Monkeys accompany you as you stroll the grounds, explore the fort, and enjoy the sunset.

The easiest way to get here is with a private driver. You really don’t need a guide, and private drivers are very reasonable in Kuala Lumpur.

Silver Leaf Monkeys live together as Harems with only one adult male. The mothers are directly responsible for their babies, but all the females communally raise and wean the young. The social bonds between females are strong and life long. Females born into a troop never leave it. This may explain why the troops are so gentle and relaxed.