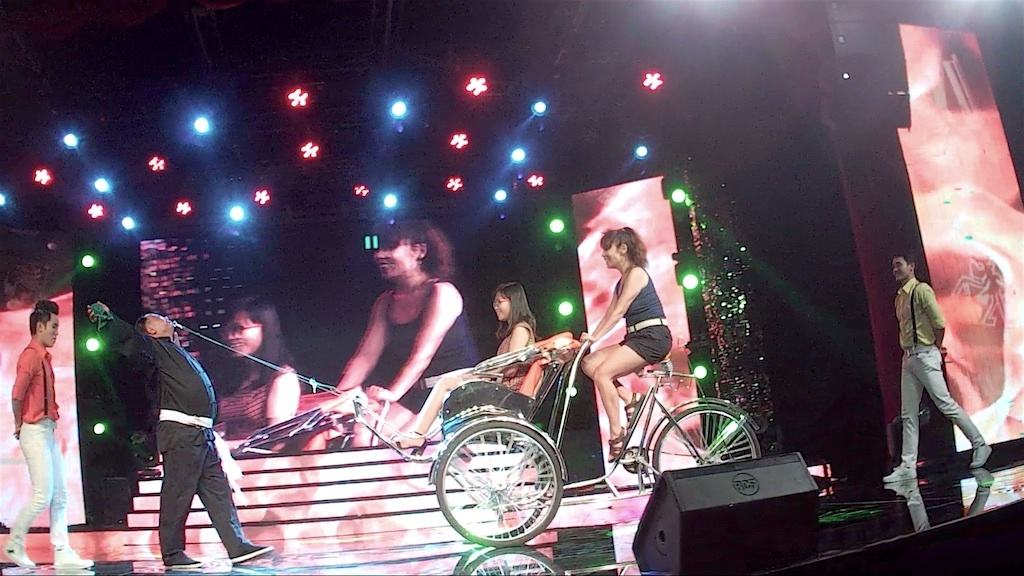 The Most Amazing Vietnamese Cyclo Ride

Posted at h in Vietnam by 84 Comments

My first Vietnamese cyclo ride was the most amazing in the whole country. The “driver” pulled me and the cyclo WITH HIS EYES!

I thought the strain might rip out his eyes, but I couldn’t stop staring at his tortured face. Veins erupted, eyelids bulged, and every muscle twitched from the unnatural burden.

It’s not what I imagined for my first Vietnamese cyclo ride, but I’ll never forget it.

This was the most amazing cyclo ride in all of the country!Click To Tweet

Unlike typical cyclo rides, mine was on a stage not the street. It was part of a performance called “The Amazing Viet Show,” in Ho Chi Minh City.

You might think of it as a “freak show” with some Vietnamese song and dance thrown in. The show has many sword swallowers, contortionists, and other performers with unusual bodies and special skills.

We saw a lot of weird acts. So when they called me on stage, I had no idea what to expect.

Would they ask me to do something dangerous – or worse, something gross? They called me up with a Vietnamese woman, which made me feel better. At least, I wouldn’t be alone on stage.

When they directed us to the cyclo, I felt relieved and happy. I always wanted to ride a cyclo, and it looked safe? How bad could it be? 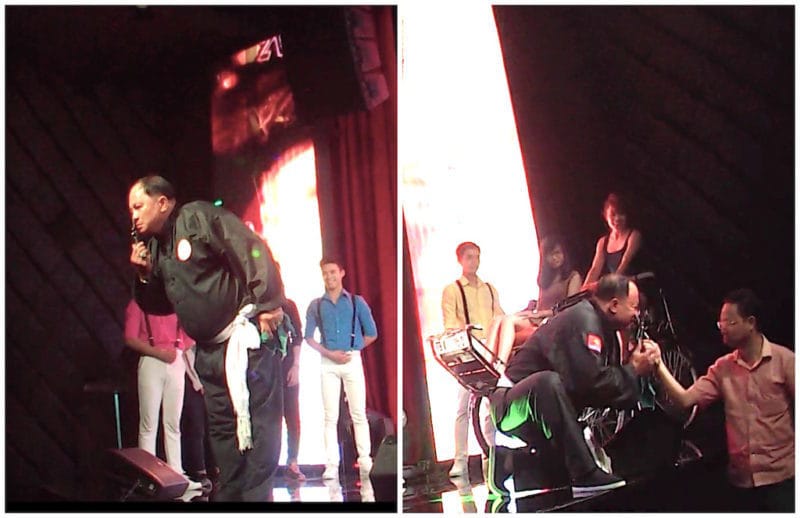 I realized he was going to use those horrible eye pieces

As I climbed on the cyclo with my new Vietnamese friend, I noticed the performer putting these devious contraptions in his eyes. I realized what this performance would be. Shiny and metallic, with dangling chains, these devices would bind this man’s eyes to the cyclo. And he was going to pull us around with his eyes!

The other woman sat inside the cyclo. I had to sit on the “driver’s seat.” The assistant told me to put my feet on a bar, not the pedals. “Never touch. Very Bad. No touch, OK,” he said. I started to get nervous again. I didn’t want to mess up and hurt the performer.

The performer then approached the cyclo and hooked up his eye piece. This moment had a lot of flair. Stage lights were beaming, dramatic music was blasting, and the performer was the picture of intense concentration. I guess part of this was an act, but his eyes were in serious danger too.

This wasn’t just a magician doing card tricks. He could get seriously hurt. Imagine life without eyelids. 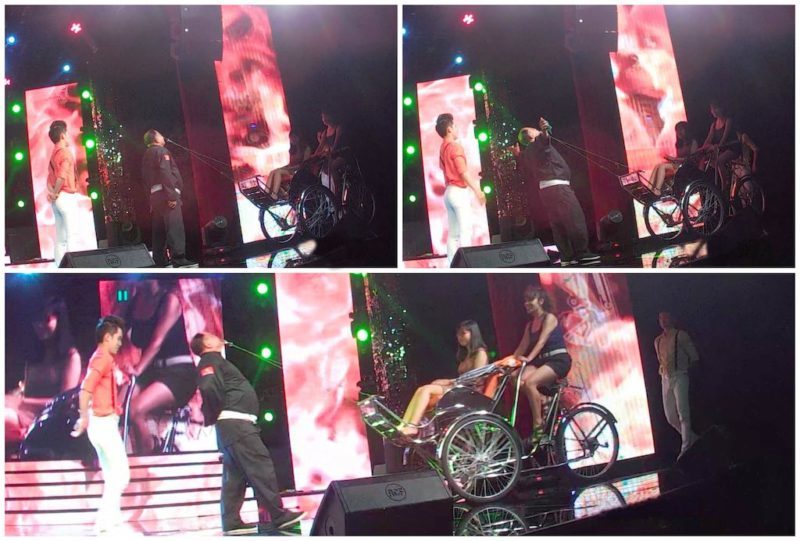 Yikes. He’s moving us with his eyes!

He scrunches his face, leans back, and pulls tight the wires. After a few tense seconds, we begin to roll. I was thrilled at the feat, but I felt more relieved than anything. A few more seconds and we crossed the stage.

The mostly Vietnamese crowd roared in applause. They had probably never seen their iconic cyclo used like this. 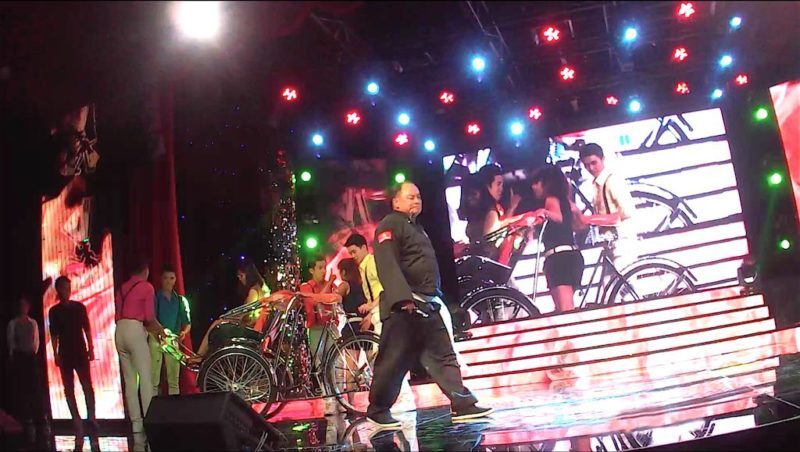 As if that weren’t enough, there’s one more ride

When assistants stopped the cyclo, I hopped out thinking that the act was over. But one assistant grabbed me and said “One more time, OK.” As strange and impressive as it was, the first ride was just the warm up.

The More the Merrier

4 people in the Vietnamese Cyclo!

They then loaded 4 of us into the Vietnamese cyclo – 3 women and 1 man. No way, I thought. Together with the big metal cyclo, we weighed several hundred pounds! And the performer would pull us with only his eyes.

I remembered all the little things that hurt my eyes in the past. An eyelash, a speck of dust, rubbing them a bit too hard, almost any eye contact is painful. I felt so much “sympathy pain” simply imagining what the next moments would hold. 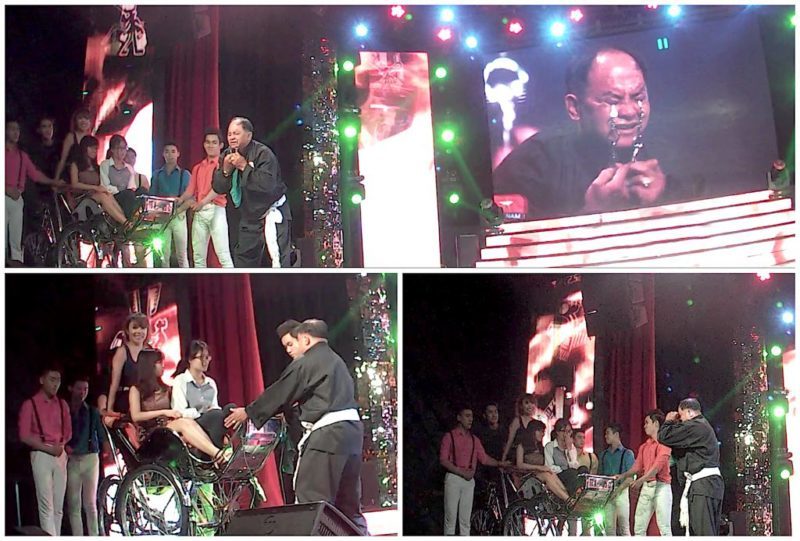 Imagine having those evil things in your eyes

So the performer approaches again with those “torture devices” dangling from his eyes. The assistants hook him to the cyclo. 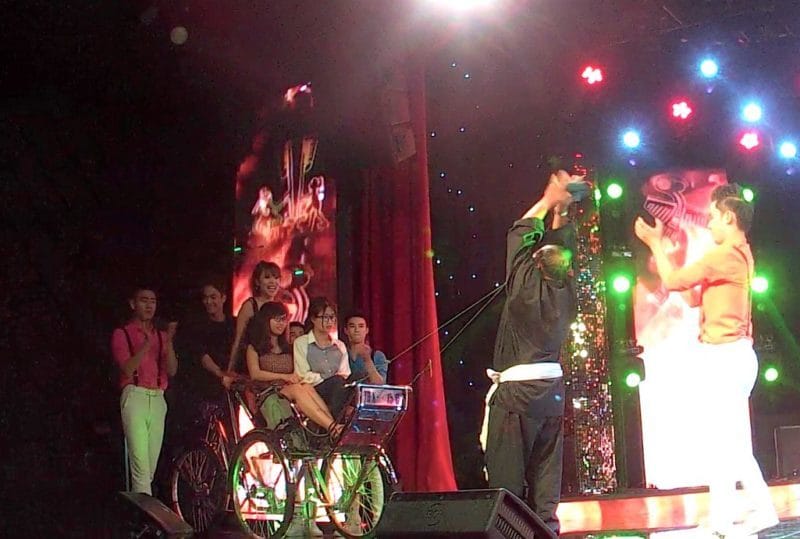 The tortured look on his face was excruciating

He leans back slowly, gradually pulling the wires taut, and trying to get us rolling. His expression displayed the burden and will haunt me forever. Bright red and shiny with sweat, his face was tangle of fat, squiggly veins. Every muscle twitched. His eyelids bulged from the strain.

I could actually see his eyelids unnaturally stretch. I grew tense. They were only tender eyelids. I imagined them ripping right off his face. I wanted to look away, but I couldn’t. 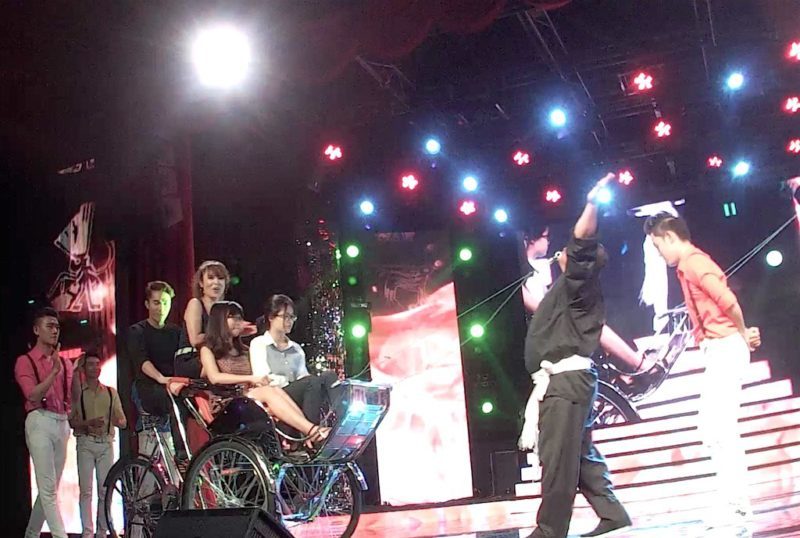 We finally started to roll

Then he gave a Karate shout, and we were rolling across the stage. Once we were moving, his face relaxed and so did I.

The most amazing cyclo ride

When I hopped off the cyclo and left the stage, I felt like I just got off a roller coaster. I was excited and thrilled with some lingering fear and nausea. I know my eyes weren’t in danger, but it felt that way.

It was an incredible show. And the most amazing Vietnamese cyclo ride. 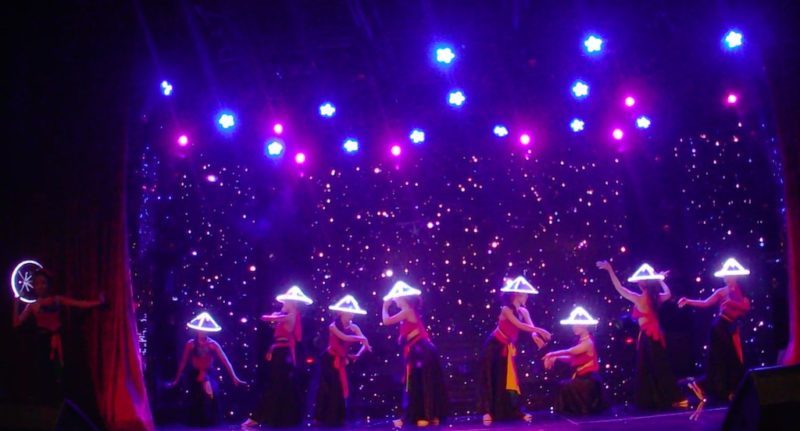 If you’re ever in Ho Chi Minh city, we recommend seeing the Amazing Viet Show. It’s a blast.

Tips on Hiring a Vietnamese Cyclo

By the way, a “normal” Vietnamese cyclo ride is a must when here. It’s a classic Vietnamese experience that’s both fun and useful. Cyclos are a unique way to see Vietnam. They are used mostly for tours but you can also use them like a taxi for short rides.

If you hire one independently, rates vary from driver to driver and from city to city. You will have to negotiate. 50,000VND – 100,000VND ($2-$5USD) is a fair rate to pay for a 1-hour ride around popular sites for one person.

Some will ask outrageous prices, but never pay more than 100,000VND per hour.

Share
Tweet
Pin
You May Also Enjoy:
A Landmark of History and Luxury – Our Review of Hotel Continental Saigon